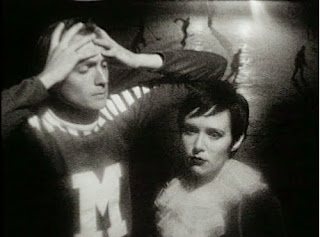 Sex. Murder. Hockey. Cowards Bend the Knee, the first entry in Guy Maddin's "Me Trilogy," which includes Brand Upon the Brain! and My Winnipeg, is a delightfully twisted little piece of work which is as darkly funny and enjoyable as it is deeply eccentric. A silent film shot in black and white and on Super-8mm film, what Cowards Bend the Knee lacks in budget (the film was made for about $30k during the pre-production period of Maddin's great The Saddest Music in the World), it makes up for in sheer entertaining weirdness, having been originally conceived of as series of short films that would form part of an art installation. However it came into being, the film is one which makes the most of what it has and uses it to deliver something unlike anything you've ever seen before.

The protagonist of Cowards Bend the Knee is Guy Maddin (Darcy Fehr), a player for the Winnipeg Maroons whose girlfriend, Veronica (Amy Stewart), has discovered that she's pregnant. Though Guy's father (Victor Cowie) tells him he ought to go visit his dying mother, Guy instead takes Veronica to procure a back alley abortion at a beauty salon which also acts as a bordello and is run by Liliom (Tara Birtwistle), the lover of Guy's hockey teammate Shaky (David Stuart Evans). As Veronica undergoes the procedure, Guy sets eyes on Liliom's daughter, Meta (Melissa Dionisio), and is instantly smitten, walking out on Veronica in the middle of the operation in order to pursue Meta, who reveals that her father was murdered by Liliom and Shaky. Demanding that her father's murder be avenged before she gives in to Guy's lust, Meta talks Guy into agreeing to undergo an operation with Dr. Fusi (Louis Negin) - who was last seen performing the abortion which ultimately left Veronica dead (leaving behind a blood stain in the shape of a maple leaf, no less) - in order to replace Guy's hands with the severed hands of Meta's father, which have been stained blue as a result of being preserved in a jar of hair dye.

Waking up with his new blue hands and believing them to be possessed by the angry spirit of Meta's father, Guy goes on a murder spree which includes killing Shaky in the middle of a hockey game (no one notices because the Maroons have just won and it merely looks like they're aggressively celebrating) and killing a police officer in the middle of the police station (no one notices because... that's Maddin's sense of humor), and trying to kill Liliom but seducing her instead. As he navigates ongoing relationships with both Meta and Liliom, Guy falls in love with the ghost of Veronica, though his memory of the real Veronica who was once his girlfriend has disappeared. When Meta finally sours on Guy, she demands that Dr. Fusi return her father's hands to her, unaware that Dr. Fusi simply threw the father's hands away and painted Guy's hands blue. In order to appease her, Dr. Fusi cuts off Guy's hands, making it necessary for his hockey gloves to be taped to his stumps so that he can play in the big game. Meanwhile, ghost Veronica has fallen in love with the freshly widowed Maddin Sr. and an apocalypse has been predicted by a set of tarot cards.

Although it may sound (and sometimes seems) like a work founded in the ridiculous, Cowards Bend the Knee is a film with a lot of serious things on its mind, particularly when it comes to sex. The point of entry into this crazy story is Guy's relationship with Veronica, severed once he lays eyes on Meta. Though the torment that Guy comes to feel as the film progresses is ostensibly a result of his feeling like a prisoner of his "counterfeit" hands, it's telling that he only gets around to finally killing Liliom when the ghost of Veronica returns to the salon for a second abortion. His real source of torment is his abandonment of Veronica, followed by losing her a second time to his own father. That, in turn, feeds into his anxiety over the state of his own manhood in comparison to that of his father, a notion the film expresses as literally as possible in a scene in which Maddin Sr. has to help the now handless Guy at the urinal, jokingly stating that he still "needs [his] hand held" before revealing his own genitals, the size of leaves Guy feeling particularly cowed. And all of this is to say nothing of the state of ecstasy that Meta seems to descend into whenever she's in contact with her father's hands, or the fact that the film begins with a drop of sperm being placed under a microscope, revealing a tiny hockey game going on inside which an intertitle refers to as "The Sperm Players." The psychosexual concerns of the film are never very far from the forefront and Maddin (the filmmaker, not the character) is never afraid to keep pushing the limits as he plumbs the depths to examine fears (both the deeply personal and the general/societal) surrounding sexuality.

In addition to the film's sometimes explicit sexual (and merely sexualized) content, Cowards Bend the Knee is also a film with a light sprinkling of body-horror, and some just generally strange images and scenes, including some set in a secret wax museum featuring the greatest players in Winnipeg Maroons history - wax figures which turn out to be possessed by the spirits of the players who inspired them. If all of this sounds weird to you, rest assured that it is. However, if there's any one thing that can be said about Cowards Bend the Knee, it's that you'll never be bored watching it. Running at a brisk 60 minutes, packing as much into that time as possible, and creating a lot out of obviously limited resources, Cowards is one of Maddin's most imaginative and quietly ambitious films to date.
Posted by Norma Desmond at 8:00 AM