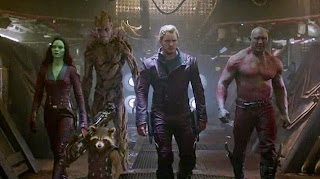 Late to the party, I have no excuse. The biggest movie of the year (so far; last year's champ, Katniss Everdeen, returns to theaters in November), Guardians of the Galaxy continues Marvel Studios' solid run of films that have not only raked in a fortune but also garnered critical acclaim. I already thought that Warner Bros.' rumored "no jokes" rule for its forthcoming attempt to create a shared DC comics movie universe was kind of dumb, but it seems more so after seeing this film, which relies heavily on humor and succeeds in large part because of it, too. The effects are, of course, as spectacular as expected but it takes more than good special effects to make a good movie, and the fact that the film is too long, too over-stuffed, and ends in pretty much the same way as every Marvel movie since The Avengers (there has to be other ways to end these movies than with a protracted sky battle) is alleviated by how much fun it is. I realize that Warner Bros./DC is probably a little concerned that if they start working humor into their product they might tip back into the high camp of the Joel Schumacher Batman movies, but a few jokes can go a long way.

The film opens on Earth in 1988, when young Peter Quill flees his mother's deathbed and is abducted by space pirates. 26 years later, Quill (now played by a winning Chris Pratt), also known (or wanting to be known, at any rate) as Star Lord, lands on the planet Morag and retrieves a mysterious orb. Just as he lays hands on it, however, he's set upon by Korath (Djimon Hounsou), a subordinate to Ronan (Lee Pace) who needs to get hold of the orb as part of a deal with the powerful Thanos. Quill escapes with the orb but when he lands on Xandar and tries to sell it, he finds himself ambushed by Gamora (Zoe Saldana), the adopted daughter of Thanos supposedly sent after Quill by Ronan, though she actually has other ideas; and pursued by bounty hunters Rocket (voiced by Bradley Cooper), a genetically modified raccoon, and the humanoid tree Groot (voiced by Vin Diesel). Following a street fight, all four are captured by the police and imprisoned, where they make the acquaintance of Drax the Destroyer (Dave Bautista), who initially wants to murder Gamora to avenge the slaughter of his family at the hands of Ronan but is talked into letting her live so that he might be led to Ronan. The five prisoners escape and make their way to Knowhere, an outpost built in a giant severed head where Quill, Gamora, Rocket and Groot plan to sell the orb for a large profit which they'll split between them. While the four are meeting with the Collector (Benicio del Torro) and getting a lesson in the value of the orb, a drunken Drax lures Ronan to Knowhere so that he can kill him and avenge his family. Instead, when Ronan and his forces descend on Knowhere, Ronan beats Drax and makes off with orb, which will give him immeasurable power.

Almost killed trying to keep the orb out of Ronan's hands, Gamora and Quill are "rescued" by the Ravagers, the same pirates who abducted Quill as a child and who are led by Yondu (Michael Rooker), who is a father figure of sorts to Quill but also has seemingly few qualms about the idea of killing him. Needing to get the orb back from Ronan before he sets about destroying planets with it, Quill and his ragtag team (reunited after Rocket, Drax and Groot attempt to "save" Quill and Gamora by blowing up Yondu's ship) make a deal with the Ravagers to work together and head for Xandar, which is first on Ronan's hit list. Facing off with Ronan in these circumstances is almost certainly a suicide mission, something acknowledged between the band of misfits as they try to formulate their plan of attack. But, having spent much of their lives doing wrong, they decide that they finally want to do something that matters, even if it results in their deaths (though Rocket only comes around to this reluctantly). As Ronan and his flagship descend upon Xandar, Quill's ship the Milano is there to meet him, flanked by the Ravagers and by Xandar's fleet, and engages in an epic battle to save Xandar and get the orb into safe hands.

Since 1977, lots of films have riffed on Star Wars but I can't remember the last time I saw a film that did it so successfully, getting not only the formula but also the spirit right. Although it gets serious at points, the film is mostly lighthearted and it doesn't overreach, content to work with its inherent pulpiness rather than against it. I mean, a movie in which two of the main characters are a raccoon and tree is probably never in danger of being too "serious," but, on the other hand, the film's characterizations of Rocket and Groot (a bizarro world C-3PO and R2-D2) are two of its more successful aspects, thanks in no small part to fantastic voice work by Cooper and Diesel. Groot may only ever say three words, but Diesel manages to suggest a different meaning to them each time he utters them, and Cooper is able to bring a surprising amount of feeling and pathos to Rocket. The two characters function to bring a fair bit of the film's comic relief (Pratt shares that duty as the Quill, whose confidence doesn't always match his actual skill level), but they also do their part to give the film heart, which is a necessity for a film like this in terms of transcending the limits of the genre. Lots of action laden films have an emptiness at their core that ultimately make them disposable products even if they're successful and popular in the short-term. The resonant films of this type, the kind that people still recall with fondness years and decades later, are the ones with heart, the ones where you root for the heroes not simply because they're the heroes, but because they manage to take root in an emotional space.

Guardians of the Galaxy succeeds on just about every level. Marvel's record when it comes to casting continues to be impeccable not just in terms of finding the right actor to play the right part, but also in terms of creating the right cast chemistry, the effects work is top notch, and the screenplay finds a good balance between the high stakes of its story and the film's overall lightness of touch. At just over two hours Guardians is longer than it needs to be (though at a time when movies like Transformers: Age of Extinction are clocking in at just under 3 hours, it's difficult to argue that any good movie is too long) and a little busier than it needs to be, but despite that little bit of extra weight, it's ultimately everything that a summer movie should be. With $300 million (and counting) in domestic box office alone, it's no surprise that plans are already set for a Guardians sequel; unlike a lot of movies that get sequels, this one would be justified in returning to the well based on quality as well as box office.
Posted by Norma Desmond at 8:00 AM