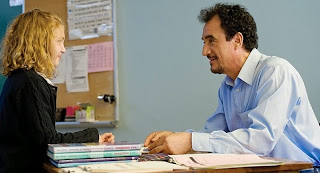 Since 2003, when Denys Arcand's The Barbarian Invasions took the prize, Canada has had a pretty decent track record when it comes to the Best Foreign Language Film category at the Oscars. Invasions is the only Canadian winner to date, but four Canadian films have been nominated in the category since then, compared to the mere two that earned nominations between 1971 (the first year Canada submitted to the category) and 2003. One of those nominees was Philippe Falardeau's Monsieur Lazhar, a quiet and exceedingly gentle movie, particularly compared to the Canadian nominees of the year immediately before (Denis Villeneuve's Greek tragedy Incendies) and immediately after (Kim Nguyen's searing child soldier drama Rebelle/War Witch). On the surface, Monsieur Lazhar's tale of a teacher trying to connect with his students sounds like a familiar story (and the sort of typical, non-challenging fare that AMPAS so often goes for in the foreign language category), but while Falardeau keeps things simple, he nevertheless manages to tell a deeply affecting story about the psychic space where grief resides and the many ways that grief finds to express itself.

Monsieur Lazhar opens in the immediate aftermath of an act of desperation and cruelty, as Simon (Emilien Neron), an elementary school student who is tasked with bringing the milk delivery to his classroom every morning, arrives to find that his teacher has hanged herself in the classroom. The only other student who sees the body before the school administration is able to lock the room down is Alice (Sophie Nelisse), who is Simon's friend, but who also feels as though Simon might be responsible for the teacher's suicide. In the days that follow, a man named Bachir Lazhar (Mohamed Fellag) arrives unsolicited at the school looking to take the now vacant teaching position and the school's principal, desperate as a result of a fruitless search for a substitute, decides to give him a chance. Lazhar, an Algerian immigrant, gets off to a somewhat rough start with the students resulting from his attempt to use Balzac as a teaching tool, grammatical differences between Algerian and Quebec French, and a slap he delivers to the back of a misbehaving student's head, but quickly settles into his role and develops a comfortable rapport with his students, particularly Alice, who longs for a stable and consistent adult presence in her life because her mother, who is a pilot, is often away and her father appears to be absent entirely.

Like Alice, Simon also has a lonely home life, though his situation is far more desperate and he is more isolated in his grief and confusion than any of the other students. Why, he asks late in the film, would the teacher hang herself in the classroom when she knew that he would be coming to deliver the milk, just like he does every day? As the story unfolds, the film reveals that Simon and the teacher had a fraught history prior to the suicide, one involving private tutoring, an allegation of inappropriate conduct, and a casual, in-house investigation by the school's administration which has resulted in at least one teacher thinking that Simon is a trouble maker who should be expelled and made into someone else's problem. To Simon, and to Alice, the way that the teacher committed suicide feels like a direct message to him, a way of ensuring that he knows that it's his fault, and the film is very precise in the way that it constructs context for the anger and confusion that both Simon and Alice feel as a result of the situation, and the ways that they act out because of that. Meanwhile, Lazhar is dealing with grief of his own, his family having been murdered in Algeria as a result of a book his wife had written and which started a political firestorm. In addition to mourning his family, Lazhar is also struggling to deal with his identity as a displaced person (part of the story involves his fight for refugee status) - and hiding the fact that he isn't actually certified to teach at all.

Adapted by Falardeau from a story by Evelyne de la Cheneliere, Monsieur Lazhar moves at a careful but deeply engrossing pace. Unlike many films which feature children as main and supporting characters, Monsieur Lazhar doesn't view them as an easy source of laughs in the kids-say-the-darndest-things way, nor does it see them as tragic figures to be saved by "One Very Special Teacher." It treats them like human beings, complex, contradictory, and articulate, even if their expressions of their feelings sometimes fall on deaf adult ears. The adults around them keep telling them how traumatized they are by the suicide, but they don't always seem to be listening to how the kids are responding to those statements. Some of the kids, such as Simon and Alice and a boy who is reluctant to go for lunch just in case history repeats itself during the break, certainly are deeply traumatized and their grief is still as sharp as the school year approaches its end as they were closer to the beginning of the school year, when the suicide happened; but for other kids the psychic wounds have faded more quickly, and by treating the entire class as if they're one being, rather than several individuals who are recovering at different rates, the adults betray the fact that while they've been giving the kids a forum to talk about their feelings via group counselling, they aren't necessarily paying attention to what each kid is actually saying. The film, like its protagonist, recognizes that individuality, and though some of the kids are a lot more well-developed as characters by the film, Monsieur Lazhar doesn't treat them as if they're all feeling or thinking the same thing en masse.

Nelisse and Neron deliver strong and sometimes surprisingly nuanced performances as Alice and Simon, respectively. The arc they're given would see like a lot to entrust to two child actors, as the characters begin as friends and then are torn apart by the confusion and anger writhing underneath their trauma, and then slowly find their way back to each other, but they handle the material well and are no doubt aided in that respect by Falardeau, who is no stranger to coaxing solid performances out of child actors (see also his 2008 film It's Not Me, I Swear!). The child actors bring vital shades to Monsieur Lazhar, but the endeavor is ultimately anchored by Fellag, who delivers a subtle and touching performance as the title character. Monsieur Lazhar is a very good film which, despite its potentially melodramatic premise, manages to elicit emotion in a way that doesn't feel overly manipulative. It does require a decent suspension of disbelief - despite what movies might have you believe, schools don't worry about filing the teaching position first and vetting the candidates to determine whether they're actually qualified second - but it rewards that suspension of disbelief by putting it to good use in order to tell a solid story with a great emotional payoff.
Posted by Norma Desmond at 8:00 AM