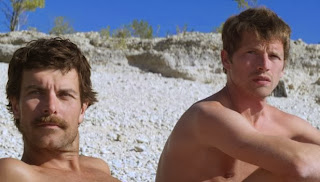 There's something almost hypnotic about Alain Guiraudie's Stranger by the Lake, a brutally effective thriller about sex and death in which the intensity of the characters' abandon is matched only by the sharp precision of Guiraudie's storytelling. Sexually explicit, rigidly structured, and narrowly focused, the film may be a bridge too far for some viewers, particularly those who prefer their thrillers a little faster paced, but its level of craft can't be denied.

Stranger by the Lake takes place entirely at a small section of beach frequented by gay men who've come to sunbathe by the lake and have sexual adventures in the surrounding woods. One of the regulars is Franck (Pierre de Ladonchamps), whose search for connection amidst the hedonistic atmosphere of the cruising ground leads to him developing a friendship with Henri (Patrick d'Assumcao), who is straight but hangs out at the edge of that part of the beach because he thinks he has a better chance of being left alone than on the other side of the lake, which is frequented by families; and to pursuing a relationship with Michel (Christophe Paou), who to Franck's disappointment is already partnered up with another man. Franck's disappointment doesn't last long, however, as by staying late one night he heads back towards the beach from the woods in time to witness Michel drowning his lover in the lake, the other man's shirt, towel and shoes abandoned on the beach, his car left parked in the same spot for days as all the other men who frequent the beach enter into what seems to be a silent pact not to ask questions.

Despite the horrific crime that he's witnessed, Franck continues to find himself drawn to Michel and, in fact, seems to be even more intensely attracted to him now that he's surrounded by an aura of danger. They become lovers but the relationship soon becomes strained, not because of any moral torment on either of their parts, but because Michel refuses Franck's attempts to extend the relationship beyond the boundaries of the lake and the woods. While Franck longs to go out somewhere with Michel and spend the night with him, Michel is content to restrict their relationship to fleeting encounters at the lake, which has the effect of cooling Franck's ardor. Things grow worse between them after the body of Michel's ex-lover surfaces and a police inspector begins asking questions which make it clear to Michel that Franck must know something about what happened that night by the lake, and leaves Franck wondering how far Michel will go to keep his crime a secret.

Stranger by the Lake is built on a repeating structure of shots which acts as a sort of ebb and flow to the story, with passage of time demarcated by shots of Franck pulling his car up to the edge of the woods. Although he socializes with few men beyond Michel and Henri, other men who frequent the beach are obviously known to him, by sight if nothing else, and there's a feeling of sameness to the way that various passages unfold, with the men laying out on the beach during the earlier part of the day to sunbathe and then, as the afternoon wears on, seeming to retreat into the woods for various hookups. These encounters, some seen only in the background of shots, others shown in explicit detail, are notable for their frankness but, despite leaving virtually nothing to the imagination, the sex scenes are not superfluous or gratuitous. The sex in the film speaks directly to its primary theme, which is the recklessness of sexual desire. Although Guiraudie has stated that he didn't craft the story as a metaphor for the HIV/AIDs crisis, it's easy to read that into the film, particularly in light of two exchanges that Franck has with men he joins in the woods. In the first exchange, Franck ends up sexually frustrated by the discovery that neither he nor his would-be partner have condoms, and the other man's refusal to risk carrying on without one; in the second exchange, Franck and Michel agree to proceed to unprotected sex, neither concerned about the dangers that might present. The woods, as depicted by Guiraudie, have an Edenic quality which, despite the misgivings of the first man Franck encounters, seems almost free of consequences as various men pair up in various ways from one day to another; it's an idealized place, a place which is innocent, in its way, until that innocence is lost when Michel commits his first murder, and then continues to bring death to others.

Yet, even if the film isn't intended as a commentary on the AIDs crisis, it is certainly a commentary on the self-destructive nature of lust. Franck is attracted to Michel before he knows his true nature and is only more powerfully drawn to him after he witnesses the murder. As it becomes increasingly apparent that Michel has started to suspect that Franck was witness to his crime, and the balance of tension between the two shifts from erotic to deadly, Franck's need for Michel only seems to grow. The danger is the attraction, a fact which is underscored by the film's ending. In telling the story, Guiraudie uses both the mingling of sex and danger, and the insulated nature of the community to great effect. The small community of men who congregate at the beach are suspicious of outsiders - Henri is a mystery to them and only Franck is lacking enough in suspicion to actually talk to him - and protective of what they have, which is why they don't invite the outside in by acknowledging the likelihood that a man has died until forced to by the police. The police detective is baffled by this behavior, but the fact of it demonstrates the fragility of the community that has been created in that small section of beach. To acknowledge the danger or the death would be to acknowledge that the idyll was only an illusion, and thereby shatter it forever.

Stranger by the Lake is a deeply engrossing film which only seems to grow thematically richer the more you think about it. Although it's slow to come to a boil, once it does it moves forward with a seemingly unstoppable intensity, leading up to its masterfully ambiguous ending. Guiraudie is a storyteller in complete command of his story, and that shows in every frame of Stranger by the Lake.
Posted by Norma Desmond at 8:00 AM