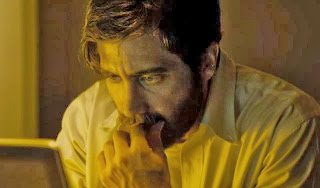 The best thing I can say about Denis Villeneuve's Enemy is that at least it tries something, and an interesting failure is pretty much always more worthy of discussion than a conventional success. Adapted from the Jose Saramago novel The Double, the film focuses so heavily on the visual aspects of its storytelling that it doesn't seem to notice how undercooked its narrative is. Although it possesses some strengths, including a solid performance by Jake Gyllenhaal in the dual roles of identical strangers, the film never develops the requisite sense of urgency that its story requires, making for a sleepy and somewhat lifeless thriller.

Gyllenhaal stars as Adam Bell, a history professor whose relationship with his girlfriend, Mary (Melanie Laurent), has grown stale with routine and who seems to be trapped in the kind of repetition of events that he lectures about in class. One night on the advice of a coworker, he rents a movie and is shocked when he spots a bit player who appears to be his exact double. Adam does some digging and eventually tracks down a phone number for his doppelganger, who works under the stage name Daniel Saint Claire and is actually named Anthony Claire, but freaks the other man out with his vaguely stalkerish way of explaining what he's been doing. Anthony, however, is intrigued enough that he later reaches out to Adam and agrees to meet, and Anthony's wife, Helen (Sarah Gadon), suspicious that Anthony is having an affair, finds the notes he's taken about Adam and seeks him out herself, though she's too shocked when she sees him to say anything to him.

Adam and Anthony meet and while Anthony seems excited by the possibilities of there being an exact double of himself, Adam flees, freaked out by the fact that they really are exactly the same, right down to a scar on each of their torsos. Anthony invades Adam's life just as Adam encroached on his own, but while Adam's interest is more intellectual and is causing him to have an existential crisis, Anthony's interest is far more base, particularly after he gets a look at Mary. After intimidating Adam into agreeing to let him take over his identity for a weekend in exchange for going their separate ways thereafter, Anthony heads off with a clueless Mary while Adam, left to stew, decides that turnabout is fair play and goes to Anthony's apartment to spend the weekend as him, only to have second thoughts once Helen gets home. Psychologically, the situation is just too much for Adam - either he or Anthony will have to go.

From the outset, Enemy proceeds in a somewhat dream-like fashion, filmed in hazy, gold-tinged light that suggests that all is not quite well - and, of course, it's not, as the story is told from the perspective of a man divided. Enemy is firmly rooted in the psyche of its protagonist, which could be Adam or Anthony, or even neither. Rather, the true protagonist could be an unnamed man whose personality contains both an Adam side and an Anthony side, the one (Adam) representing the man's guilt over having left his wife for his mistress, the other (Anthony) representing his unquenchable need to escape marriage and domesticity. That the two characters are one and the same is signaled early, through the fact that Anthony has both a real and a stage name - he's one man with two identities - and reiterated later on in a comment made by Adam's mother (played by the incomprable Isabella Rossellini). Further, in his lectures Adam talks a lot about the circularity of events, and the film basically begins and ends with a variation on the same thing, as it starts with Anthony in possession of a special key and it ends with Adam, having essentially become Anthony, finding the key. Adam can destroy Anthony, but in doing so he merely becomes Anthony and sets back into motion the same events that brought them to this point in the first place.

Adapted for the screen by Javier Gullon, Enemy is certainly a mind bender, but despite the beautiful surrealism of its last shot it probably would be have been better served by hewing a little more closely to the novel's ending, which would have brought the themes of duality and repetition into sharper relief. That said, if the film had ever found its pulse that probably wouldn't even matter because the narrative's momentum could have disguised the fact that the film is only offering a fairly superficial exploration of its themes. The ultimate flatness of the film is a shame, not only because it has a premise that seems rife with possibilities, but because it features two strong performances by Gyllenhaal, who manages to make Adam and Anthony two very distinct characters who emit very different energies. Despite best efforts, however, Enemy just never rises to the level of its ambition.
Posted by Norma Desmond at 8:00 AM

Excellent to know about the reviews of the movie reviews and i can read many fantastic news from your blog. Thanks for sharing.

I thought Enemy started out pretty strong, but by the end I was really bored.