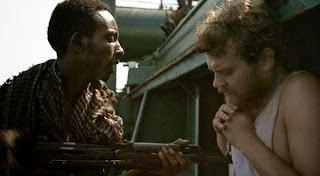 Tobias Lindholm's A Hijacking is like the yin to Captain Phillips' yang. Where the latter is a white knuckle thriller which centers the action on the hijacked boat and shows the situation coming to a (relatively) swift, if not peaceful, end, the former is more slow going, putting the bulk of its action in the boardroom where negotiations are undertaken while the situation on the boat drags out for days and the weeks and then months. While the two films are wildly different animals, both are compelling and haunting pictures in which men struggle for power and find themselves broken by trauma.

A Hijacking takes place in part on a Danish cargo ship, and in part in the Copenhagen office of the company which owns the ship. There are seven crew members aboard the ship, including the ship's point of view character, a cook named Mikkel (Pilou Asbaek), whom the film briefly introduces before disaster strikes and then revisits after pirates board the ship and take them hostage. Back in Copenhagen, the film's other point of view character, Peter (Soren Malling), the CEO of the company which owns the ship, tries to take the situation in hand by opting to conduct negotiations with the pirates himself, reasoning that he's the Captain of the company. He gathers his troops and then they wait... and wait. The pirates do not immediately make contact, opting instead to let the company and the families of the crew wonder what's become of them, strategically attempting to soften the negotiator's position. When the pirates' translator, Omar (Abdihakin Asgar), finally does contact Peter, he allows Mikkel to make an impassioned plea for a speedy end to the situation, and Peter, under the guidance of an expert, hangs up in order to keep the scales of power from tipping too far into the pirates' favor. Thus begins a standoff.

The film moves back and forth from the boardroom to the boat as the situation drags on and on and the ransom demand is slowly negotiated down. In the boardroom, Peter starts out as concerned but ultimately cool, convinced that he can do the job and get everyone home safely while also preserving the company's interests as much as possible. As weeks turn into months, however, the way that the situation is wearing him down becomes all too apparent and he begins to face pressure from his Board of Directors, who are concerned that he's devoted so much of his time to the hostage situation when there's still a company to run. For Peter, passing the reins off to someone else is at that point unthinkable because he's in so deep and his conscience is heavy with the weight of the lives on the boat, and in particular he's concerned with the idea that Mikkel might have been killed as a result of a misstep in his negotiating tactics. On the boat, Mikkel is not dead - at least not in body. After months spent being terrorized by the pirates, including one traumatic incident where he's forced to participate in the killing and butchering of a goat, he's left a shell of himself and even if he ever gets off the boat, psychologically he'll probably always be "on the boat."

Lindholm unfolds A Hijacking slowly, letting the tension come from the act of waiting rather than from actual action. There's a feeling of repetition to the negotiation scenes, as Omar names a price, Peter counters, Omar laments that it's not enough, and Peter tries to convince him that it's all he can get them, and the gap between the pirates' demands and the company's willingness to bend to them slowly closes. The film is careful to show that it isn't heartlessness that keeps the company negotiating for months on end, but practicality. Immediately giving into the pirates' demands would only make them demand more, so they need to break the pirates down a bit, frustrate them so that they're willing to settle for less. The consequence of that, of course, is that the suffering of the hostages is drawn out further and the film juxtaposes the increasingly squalid and desperate situation on the boat against the increasingly anxious and desperate situation in the boardroom. A Hijacking is an evenhanded view of the situation from both the inside and the outside, one perspective showing men just trying to survive the ordeal, the other perspective showing men trying to balance the specific human cost of the lives on the boat against the general human cost of encouraging piracy by making the collection of ransom quick and easy.

The point of view that the film does not attempt to explore is that of the pirates, who emerge from the film as little more than shadows, enigmas whose thoughts about what they're doing and why they're doing it remain unspoken. This works for the story that A Hijacking wants to tell, as Lindholm makes the pirates an unknown entity in order to heighten the tension on the boat - neither we, nor the hostages, nor the negotiators know what the pirates are thinking, which makes them seem capable of anything. With the exception of Omar, who is able to communicate with Mikkel in English, we never know (just as the hostages never know) what the pirates are saying as their dialogue remains unsubtitled and it's an effective strategy for this particular story, which relies so much on being able to convey the experience of what it means to be terrorized. The film ends with the suggestion that what has happened will never truly be in the "past," that it will always be a part of those who have survived it and shape how they experience the world going forward. That sense of lasting impact applies to the film itself, as A Hijacking is the kind of film that quietly claims a corner of your brain and settles in, its images continuing to come back to you long after you've seen it.
Posted by Norma Desmond at 8:00 AM