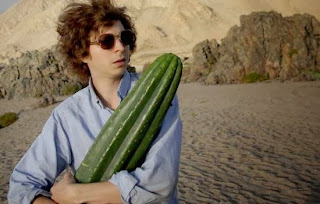 Crystal Fairy and the Magical Cactus is the type of film where pretty much everything you need to know about it is right there in the title. It's a film as loosey goosey as the title suggests, a title which names the two extremes in the protagonist's life during this small window of time. The first is Crystal Fairy, a woman who quickly establishes herself as the bane of his existence, and the second is the San Pedro cactus which becomes his reason for being, the centerpiece of his grand Chilean adventure. On the one hand, Crystal Fairy is a silly movie about a small group of people on a quest to take a drug trip, but on the other hand, it's a pretty solid character study which explores the figure of the "ugly American" abroad in ways which are both broad and subtle.

Crystal Fairy is about Jamie (Michael Cera) who in his travels in Chile has become friends with three brothers - Champa (Juan Andres Silva), Lel (Jose Miguel Silva), and Pilo (Augustin Silva) - with whom he has plans to track down a San Pedro cactus and head out to the beach for a drug trip/spiritual awakening. At a party the night before the trip, Jamie gets drunk, does some cocaine, and becomes so temporarily entranced with an oddball fellow American who calls herself Crystal Fairy (Gabby Hoffmann) that he invites her to tag along on the trip. They agree that she'll catch a bus and meet up with them halfway, a plan which Jamie promptly forgets as soon as he sobers up. Crystal, however, remembers and has every intention of taking Jamie up on the offer. While the brothers accept her presence and politely indulge her eccentricities, Jamie has far less patience and is determined to treat her like the interloper he believes her to be.

After a day spent wandering through a town trying to find someone willing to sell them a San Pedro cactus, they finally get hold of what they need and set off for the desert, Jamie desperate to start cooking the cactus, Crystal and the brothers less concerned with the drug trip that will happen than in the actual road trip they're on at that moment. While they want to stop and enjoy the scenery, Jamie is anxious to get to the beach and then, once there, obsesses over the cactus until it's finally ready. Once he gets what he wants, he starts to relax a little but he does so at the expense of Crystal, who ends up wandering the desert by herself after Jamie lets loose about what he really thinks of her. Compassionate now that he's high as a kite, Jamie feels badly about how he's treated her and once everyone has reunited at the campsite, tries to end the trip on a better note.

There are characters and there are "characters" and Crystal Fairy is definitely a "character," a borderline caricature of the hippie chick who indulges in long talks about spirituality and the cosmos, indulges in casual nudity, and doesn't shave (early in the film Jamie dubs her "Crystal Hairy"). If I was hanging out with her in real life, I would probably find her extremely annoying, but within the context of the film I found her oddly charming, primarily because of the way that writer/director Sebastian Silva uses her as a means of defining Jamie. The most slyly amusing thing about the film is how Jamie acts like she's the worst person he's ever met, that being around her is a chore he can't seem to shirk, completely blind to the fact that that's exactly how everyone else is reacting to him. From the fact that he causes the road trip to get off to a late start because he's so hung over from the night before, to the way he turns the prospective drug trip into a forced march towards fun, the brothers are about as anxious to be away from him as he is to be away from Crystal. Jamie has this idea in his head about this crazy adventure he's going to have in Chile and he's so fixated on making it happen exactly as he's pictured it that he's not actually taking a moment to experience it. Moreover, despite his vision of himself as a worldly adventurer, he refuses to actually participate in the culture that surrounds him, refusing to eat the local food, not speaking the language, and being pretty much wholly uninterested in anything other than securing his drug of choice so that he'll have the exact story that he wants to tell. It's the story that he really wants, so that he can go back home and regale people with a tale about how he's awesome.

The film, made on the fly and largely improvised, has a loose feel structurally but Silva and the actors nevertheless draw firm, defined characters. Cera, who has made something of a career out of soft spoken wimpiness, is a much harder character here, a jerk who manages to epitomize the worst stereotypes about the American traveler, including his absolute cluelessness about how he's being perceived, and Hoffmann descends so fully into her character that nothing about the performance seems false, even though the character herself is very "performative" in terms of her personality. The film does make a slight misstep late in the story, when it decides to try to "explain" why Crystal is how she is, but Hoffmann handles the long monologue so adeptly that she manages to save it in spite of itself. With its shaggy narrative and casual style, Crystal Fairy and the Magical Cactus is a film that probably won't appeal to everyone, but it's a fine piece of work that plays both as pure entertainment, and something a little deeper.
Posted by Norma Desmond at 8:00 AM