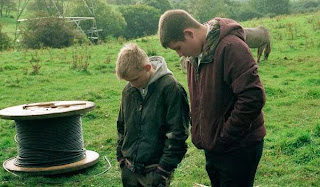 Movies don't come much bleaker than Clio Barnard's The Selfish Giant, in which the forever overcast sky perfectly exemplifies the rut the characters are stuck in. Fenced in by poverty and lack of means for upward mobility, the two kids at the center of the story have futures that can probably be best described as "limited," futures comprised of households that exceed in size the financial and other resources available, futures marked by drug abuse and violence - futures, in other words, that will be exactly like their present except that they'll be adults instead of children. That The Selfish Giant is so engaging and so often funny anyway is nothing short of a minor miracle.

The two boys of The Selfish Giant are Arbor (Conner Chapman) and Swifty (Shaun Thomas), both teetering on the edge of societal oblivion. Both come from bad situations, Swifty's family consisting of countless siblings, a father who's always screaming, and a meek mother who desperately wants Swifty to complete his education in the hope that he might raise himself to a better kind of life; Arbor's consisting of a mother at her wit's end and an drug addicted older brother who steals Arbor's hyperactivity medication for both his own use and to sell, and who is constantly getting himself into drug debts which result in attacks on the family home. Both homes are characterized by a lack of money (near the beginning of the film Swifty's family is selling the settle they don't quite own outright yet so that the electric bill can be paid, only to have repo men show up later to take back the settle that is no longer there) and government resources to help the families. When Arbor and Swifty get expelled from school for fighting with classmates, Arbor's mother berates the school administration for failing first one son and then the other, while Swifty's mother persuades him that if he shows them that he's sorry enough they may let him back in (never mind that he was actually only defending himself against a couple of students who were bullying him), but the truth is that at just 13, the system has given up on both boys, if it ever had any interest in their success in the first place.

To Arbor, being expelled from school is great news because it means that he and Swifty can go out and "make some money," which he intends to do by collecting scrap metal to sell to local scrap dealer, Kitten (Sean Gilder). Though Kitten has little use for Arbor, he comes to like Swifty, who has an affinity for horses in general and Kitten's horse Tommy in particular. While Arbor continues to hustle for scrap metal (including by stealing some from Kitten's lot to try to sell to another dealer), Kitten allows Swifty to try his hand at harness racing with Tommy, hoping to be able to make some extra money if Swifty can guide Tommy to victory. A minor rift develops between Swifty and Arbor, but is quickly patched over after Kitten discovers Arbor's theft and forces him to make up for the loss by assigning him the dangerous task of stealing a piece of electric power transmission wire. Understanding that the task is dangerous, but not quite grasping just how dangerous it is, the boys undertake it together.

Filmed in stark, straight forward style, Barnard's film explores the dire circumstances of its protagonists in a way that doesn't sensationalize or editorialize, but feels more like matter-of-fact reporting. Dog-eat-dog Capitalism provides the framework for the story - particularly the mercilessness of trying to survive at the bottom rungs - but The Selfish Giant is less interested in the general socio-economic politics of poverty than it is in exploring the specifics of who these characters are and what their lives are like. It's an unpleasant and depressing film in many respects because the options available to Swifty and Arbor are all, essentially, dead ends and because the circumstances of their births determined the limits of the options available to them; but it's such an engrossing film that you can't look away from it even in its most brutal sections. Although the film runs at a brisk 91 minute running time and provides only a short look into the lives of its characters, it manages nevertheless to give a full view of their lives and circumstances.

Aside from being a remarkably strong effort in terms of directing and writing on Barnard's part, the film is also a testament to the power of casting. Chapman and Thomas, both novice actors, deliver beautifully nuanced performances as the two boys, with Chapman in particular making an incredible impression as Arbor. Although Arbor is a bit of a nightmare (it's a shame that the school system gives up on him, but at the same time you can sort of understand why given how he behaves at school), Chapman's performance is so charismatic that he's sort of likeable in spite of his behavior, and he's easy to feel for when things start to go sideways. I'd venture to say that his is one of the best child performances I've ever seen captured on film, and it's certainly one that goes a long way towards making this film so moving and so haunting.
Posted by Norma Desmond at 8:00 AM