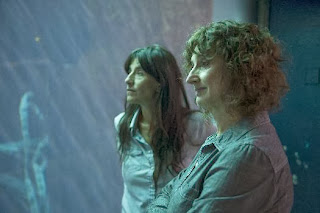 Denis Cote's Vic and Flo Saw a Bear would seem like a relaxed affair about two ex-cons struggling to pick up their lives on the outside were it not for the film's ominous musical score. The beating drums, furious and insistent, force themselves into the foreground, keeping you on edge and waiting for whatever big thing is going to happen to happen. In that respect, Vic and Flo does not disappoint - the "big thing" when it finally happens is pretty shocking, ripping the film out of a tone which at times verges on the darkly comedic, and placing it pretty firmly within the realm of brutal crime drama, and doing so without missing a beat. That's no small accomplishment, and it's only one of the things this charmingly bizarre, character-driven drama has going for it.

Vic is Victoria Champagne (Pierrette Robitaille), newly paroled and trying to reintegrate into society - or, rather, trying to avoid reintegration through the act of retreat. Deep in the Quebec countryside, she's seeks out the isolation of her uncle's home, where she finds that he's confined to a wheelchair and unable to communicate, cared for by a young neighbor, Charlot (Pier-Luc Funk) who quietly, but not necessarily completely, accepts her sudden arrival and announcement that she's going to be moving in and taking over as her uncle's caregiver. She's supported in this by her brother, who shows up just long enough to say hello and give her a wad of cash before beating a hasty retreat. As a condition of her parole, Vic is actually supposed to be living with her brother and when her parole officer, Guillaume (Marc-Andre Grodin) shows up to ensure that she's following the terms of her parole, she tells him that she is living with her brother, sticking to the story even in the face of ample evidence that she and her uncle are the only ones residing in the home. She doesn't fool Guillaume, but he opts to let it go, just as he chooses not to make an issue of it when Vic's fellow ex-con Flo (Romane Bohringer) moves in despite the parole condition that Vic not associate with people with criminal records.

Continuing the relationship they started while in prison, Vic and Flo vacillate between happiness and deep unease. While Vic is happy to be away from everything (she refuses to move to the city because she "hates people") and needs no one but Flo, Flo is not quite ready to lead such a quiet life and longs for more excitement. Guillaume is a constant presence, alternately annoying and amusing them, a feud develops between them and Charlot's father, and a woman who calls herself Marina (Marie Brassard) begins to insinuate herself into their lives for reasons that aren't immediately clear. Tension is everywhere, between Vic and Flo, between Flo and Guillaume, between the quiet life that Vic is trying to carve out for herself and the woods which, far from being a place of peace and calm, are menacing and ever encroaching on her. There's something in the air, something is about to happen - it's how great and lasting the impact will be that's in question.

Although it starts to take a brutal turn about mid-way through its run, Vic and Flo Saw a Bear is fairly relaxed in its first act, slowly establishing its setting and mood and introducing its characters without explaining much about them. We never learn, for example, what crimes either Vic or Flo committed to have ended up in jail, though we learn that Vic's was serious enough that she received a life sentence, and that Flo also received a life sentence of sorts in that the circumstances of her pre-prison life has given her a reason to need to "hide out" now that she's been released. Also left unspoken is the seemingly complex history between Vic, her brother, and her uncle. We never see Vic mistreat her wheelchair ridden uncle, but he's soon removed by social services and Vic's alleged neglect is the root of the quick developing feud with Charlot and his father. Vic's brother appears briefly in one scene, his wealth suggested by the bejeweled hand of the woman waiting for him in his car, and though he's affectionate with Vic, he also obviously can't wait to get away - and, when he does, Vic calls out to him that she's knows he's never coming back. In a less assured film, these unexplained elements would be frustrating but Cote is content to simply observe his characters and not contrive ways to make them rehash old history for the sake of the audience. Fortunately the characters are interesting enough to bear their enigmatic depictions, and the actors skilled enough to suggest what the screenplay leaves out.

In the title roles Robitaille and Bohringer deliver a pair of perfectly crafted performances, wonderfully supported by the gentle performance of Grodin and the more unsettling performance of Brassard. Until the plot, such as it is, kicks into gear the film rests largely on the skill of its actors, as it simply watches the characters circling around each other and lets the tensions slowly build. It's an assured, often compelling, sometimes funny and, towards the end, shocking film with much to its credit. The more I think about it, the more I like it. As it ended, I felt deeply disturbed by it and, though I still feel disturbed by it, I also appreciate its level of craft. Like so many Canadian films, this one may be hard to track down, but it's well worth the effort.
Posted by Norma Desmond at 8:00 AM