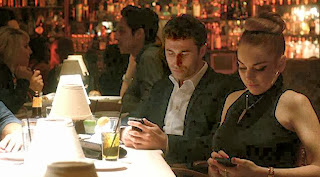 Netflix, I think we need to have a talk. What, exactly, is the thought process behind what you deem your top picks for me? Some recommendations you give me the courtesy of explaining - because I watched Pan's Labyrinth, you think I'll like The Mist; because I watched A History of Violence, you think Righteous Kill might do it for me; and because I watched Eternal Sunshine of the Spotless Mind and Donnie Darko, you think that The Number 23 might be my jam - and then sometimes you just pop movies into the list at random without any explanation at all and, in the case of The Canyons, when your best guess for how I'll rate it is "1.5 stars." Why would you recommend something to me if you think I'll only give it 1.5 stars? That's like saying, "Hey, you know what I think you'll like? This thing you're gonna hate." I mean, yeah, I watched it, but mostly because I was curious about how thoroughly you were messing with me - it says it thinks I'll give it 1.5 stars, but maybe it's just being coy and it thinks I'll actually love The Canyons, but need to be tricked into watching it. But, no. 1.5 stars would actually be generous; this movie is straight up terrible.

I'm at a loss as to how best to describe the plot of The Canyons. You could say that it's about a love triangle. You could also say that it's about two guys who both claim to want the same woman, yet are oddly obsessed with each other and engage in a series of pranks that escalate rather quickly. You could also say that it's about the devaluation of film as a means of artistic expression through the increasing ease of access to technology which has both eviscerated the "specialness" of the act of making a film and made it more difficult to find the quality product because the market place is now flooded. It begins with two couples - Christian (James Deen) and Tara (Lindsay Lohan), and Ryan (Nolan Gerard Funk) and Gina (Amanda Brooks) - having dinner, the power imbalance between them palpable. Ryan and Gina, a struggling actor and a production assistant, are deeply invested in the conversation while Christian and Tara, a trust funded dilettante who dabbles in making low budget horror movies and a former actress, are barely even present, dividing their attention between the people on the other side of the table and their phones. Ryan is going to be starring in Christian's new film, the part secured for him not by Gina, but by Tara, with whom he secretly has a past.

Unbeknownst to Christian and Gina, Ryan and Tara used to date when they first moved to Los Angeles and, despite their current relationships, are in love with each other, but Christian, who prides himself on always being in control, soon puts the pieces together thanks in part to the seemingly constant surveillance he has Tara under. In response to Tara's affair with Ryan - and, also, as part of his own psychosexual need for dominance - Christian plays a "joke" on Ryan by having the producer of the film convince him that the director wants to replace him, and that the only way he can hold onto the job is with a sexual favor. In return, Ryan, having discovered that Christian is carrying on with an actress/yoga instruction named Cynthia (Tenille Houston) on the side (a woman who, coincidence of coincidences, Ryan was also involved with when he first moved to Los Angeles), talks Cynthia into contacting Tara and telling her a horror story about Christian. From there things spiral pretty quickly towards murder and then... nothing. Honestly, this has to be one of the least consequential violent deaths in movie history.

At the time of the film's release much was made of the problems caused by Lohan during production, but in truth she's the only one who emerges here as even half-way competent. Director Paul Schrader throws in plenty of recurring shots of abandoned movie theaters and hints at the theme of filmmaking as a dying art form, if not a dying product, without ever really making anything of it, and the screenplay by Bret Easton Ellis has dialogue which comes in two modes: exposition dumps and overt artificiality. None of these characters talk like they're real people, which make the shortcomings in the acting even more apparent because it's hard not to seem wooden when you're speaking dialogue that's so hollow. Although Lohan is not immune to the woodenness that plagues the film, she does manage to rise to the occasion often enough to deliver something which resembles an actual performance. As played by Lohan, I don't necessarily buy that Tara is someone two men would go to such great lengths over, but I at least buy Tara as a person who might exist int he world, which gives her a considerable edge over the rest of the characters.

If it weren't so languid, The Canyons might be the kind of movie that's so bad it's good, but it proceeds with such purposelessness that it can't even bring itself to glory in its own inherent trashiness. I'm not really sure how a film about people engage in this much bed hopping, scheming, and violence can be so boring, but here it is. The Canyons only 99 minutes, but it's a looooong 99 minutes and in the end it has absolutely no payoff. Honestly: don't even watch this one on a dare.
Posted by Norma Desmond at 8:00 AM

Great review. Following your blog now. I do wonder how/why James Deen thinks he's a mainstream actor now? If Lindsey Lohan was the highlight then that says something. My Netflix Queue is wonky too. Like I've never been recommended any of the films you were, so there is clearly a Netflix algorithm that we're not aware of!

I'm starting to think the "algorithm" is just throwing a bunch of movies at random into a list.