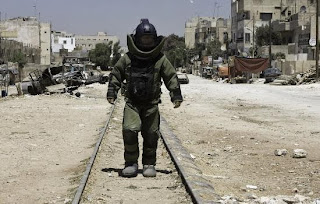 The Hurt Locker stands apart from other movies about the wars in Afghanistan and Iraq precisely because it isn't really a war movie, but a film that is part thriller, part character study. It works not because it taps into a sense of righteousness or moral authority, but because it removes itself from the political aspect of the war on terror, eschewing speeches about "why we're here" or "why we shouldn't be here" and instead focusing on the simple fact that its characters are there and that they have a job to do. It's about the ordinariness of life and death in a warzone, about the waiting for something to happen, the anticipation that an already tense situation will escalate, and the psychological toll on regular soldiers. It's a story about three men on the ground, two of whom want to do their tours and get home safely, one of whom pushes further and further, forever itching to get away from home. It's the small scale of the film, it's preoccupation with character rather than politics, which makes it resonate and which has allowed it to remain relevant where others have become diminished with hindsight and changing political sentiment.

The Hurt Locker unfolds in an episodic fashion, focusing on a handful of days in which Sergeant James (Jeremy Renner), Sergeant Sanborn (Anthony Mackie), and Specialist Eldridge (Brian Geraghty) work together as an EOD team following the death of Sergeant James' predecessor Sergeant Thompson (Guy Pearce). Having grown accustomed to working collaboratively with Thompson, Sanborn and Eldridge are jerked out of their comfort zone by James' style which, in addition to being reckless, reduces them to the role of audience to his exploits. James' attitude makes an enemy of Sanborn, whose confidence is shaken by James' unpredictability, which makes an already stressful situation almost unbearable. Though the two occasionally find common ground as two men who, by the nature of their experience in war, understand each other in a way that their loves ones back home can never understand them, that alliance is always fragile and ready to snap. The tension between the two, a tension which could easily snap into violence at any moment, mirrors the tension that surrounds them every time they set out to work at disarming bombs, usually working in the middle of open areas, surrounded on all sides by locals keeping a close eye on them. They never know if they're being watched out of curiosity or with malicious intent and when they go out, they're never just going out to take care of a bomb; they're always aware that any situation could quickly escalate into a full on combat situation and that a second of hesitation could lead to death.

The guilt of hesitation weighs heavily on Eldridge, who is left shaken over the death of Thompson and, later, the death of another man in the field. While James and Sanborn are men whose confidence demands deference (which is a large reason why they battle each other over and again), Eldridge questions himself at every turn, wanting so badly to do the right thing that he often finds himself paralyzed into doing nothing. Yet, while Eldridge's hyper awareness of the danger that surrounds him can be to his detriment in the field, his intense vulnerability brings his feelings so close the surface that he can't help but confront them. Sanborn and James, meanwhile, bury their feelings deep and throw themselves into their work because that's the thing that makes sense to them, because the line between living and dying is something they understand. When it comes to their senses of self beyond their jobs, particularly with respect to their relationships, the two are disasters, Sanborn adrift and uncertain, James retreating from the powerlessness he feels on the domestic front to return to situations which, regardless of how dangerous they are, he's more certain that he can control - or die trying. James is undoubtedly a thrill seeker who is most alive in those moments when he's closest to death, but he's also a man who can't hack the powerlessness he feels as a husband, a father, and a civilian. When he's in the field, he has two choices: live or die. At home he faces an endless series of choices (one scene finds him standing dazedly in the cereal aisle of a grocery store, trying to choose from a seemingly endless number of options) and his relationship with his wife is like a bomb he has no idea how to disarm.

Written by Mark Boal, The Hurt Locker digs deep because it focuses so thoroughly on its characters and, though it has moments of big action, because it's most concerned with the minutia of their work, the second to second details of how they do their job. Much of the film has an intimate, pseudo-documentary feel thanks to the use of handheld cameras, but the action pieces can also be fairly stylized. Director Kathryn Bigelow finds a nice balance between those two elements, using those stylized moments to throw the realism of the rest of the film into sharp relief, depicting the characters as existing in both reality and the "hyper reality" of combat. Taut and carefully constructed by Bigelow and Boal, The Hurt Locker is rife with tension from beginning to end, whether its characters are out facing death, or experiencing quiet moments when they're only facing each other. Although the film shot to prominence as part of a bizarre battle of the sexes/battle of the exes narrative during the 2009 awards season, which saw Bigelow become the first woman to win an Oscar as Best Director, it's more than just a piece of Oscar trivia. Beyond the sound and fury of an Oscar season past, it still holds up as a work of uncommon excellence.
Posted by Norma Desmond at 8:00 AM