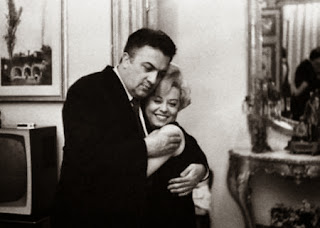 Fewer cinematic partnerships have been more enduring, or more fruitful, than that of husband and wife duo Federico Fellini and Giulietta Masina. So defining, in fact, is Fellini to Masina's screen career that his influence is absent in only eight of her nineteen films - in addition to the seven films in which he directed her, he's credited as a writer in four others. Although Fellini worked with many actors to great success, none of those collaborations could match that of his work with Masina, which helped establish him as one of the most important filmmakers of the 20th century. 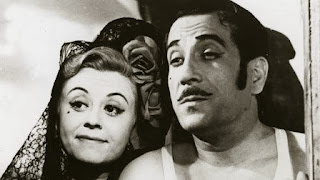 Variety Lights (1950)
It started with Variety Lights, a "backstage" film about a scrappy vaudeville troupe, in which Masina plays the painfully loyal girlfriend to the company's manager, who has fallen in love with a new female performer. Although Masina's role is a secondary one, and Fellini shares directing credit with Alberto Lattuada, the film suggests some of what was to come from their partnership, with Masina playing the woman dealt a rough hand and trying not to let it sink her, and Fellini engaging in his preoccupation with misfits and their self-enclosed worlds. 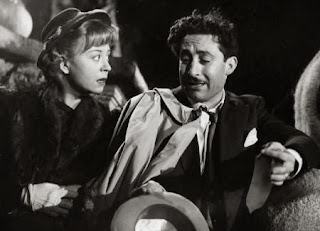 The White Sheik (1952)
Masina appears only briefly in The White Sheik, but her role as a prostitute named Cabiria foretells of what's to come in their partnership, just as the film generally is most useful for the way it foretells the direction Fellini is going in as a storyteller. His first solo effort as a director, he's still finding his footing and that voice that was so distinctly his, but the elements are there and in this tale of innocence corrupted, you can see the seeds that would lead to his next set of films. 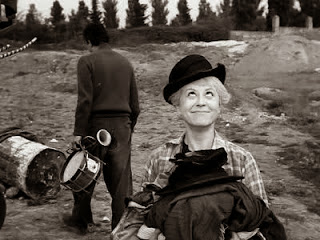 La Strada (1954)
According to Fellini, La Strada was one of the most difficult films he ever made, but the effort certainly wasn't for naught. La Strada is the story of two street performers, one a brutish strongman played by Anthony Quinn, the other a wide-eyed innocent he buys for 10,000 lire, played by Masina. Although its Quinn's character who is the active figure who drives the narrative forward, it's Masina's performance as Gelsomina that defines the film. Her gentleness gives the film its magical qualities, and also allows it to ascend to the level of tragedy in its finale, elevating the piece to the masterwork that it is. 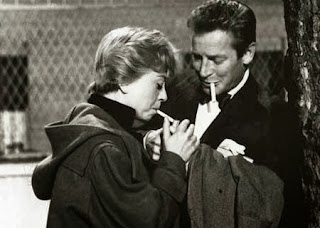 Il Bidone (1955)
Here Masina returns to the supporting ranks, as Broderick Crawford takes the lead as an aging conman looking to make a score, and Masina plays the wife of one of his partners in crime. But the film, sandwiched between the two masterpieces that Fellini and Masina made together and sometimes referred to with them as Fellini's trilogy of loneliness, contains echoes of those two other films, both in terms of themes and imagery, and fits with them nicely. Masina's role is small, but she turns in a typically graceful and skilled performance. 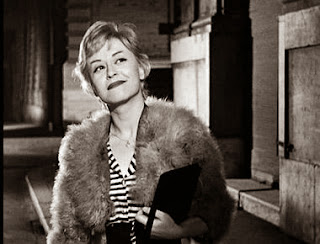 Nights of Cabiria (1957)
Arguably the defining films of the Fellini/Masina collaboration are La Strada and Nights of Cabiria, and Masina's roles in the two films could hardly be more different. While Gelsomina is innocence personified, Cabiria is a worldly character, but while the latter is harder edged, she's no less compelling in Masina's hands. The sheer depth of feeling that Masina reaches here under Fellini's guidance is a thing to behold, as her performance is one that can make you laugh and absolutely shatter your heart. Masina was awarded the Best Actress prize at the Cannes Film Festival for this performance, and the only thing surprising about that she didn't get a ton of other awards in addition. Cabiria is a perfect film and shows its director and star working together in absolute harmony. 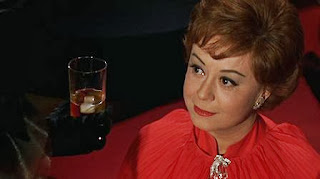 Juliet of the Spirits (1965)
After a long break from working together (during which time the director made two classics, La Dolce Vita and 81/2, with Marcello Mastroianni, his other frequent collaborator), Fellini and Masina returned to the screen together in a dreamy film about a woman trying to find the strength to leave her unfaithful husband. The first film Fellini made in color, Juliet of the Spirits is like a burst of sensation and stimuli which would overwhelm a lesser actress, but Masina holds down the fort. Although savaged by critics when it was released, the film has since undergone something of a reassessment and is now acknowledged as an important turning point in Fellini's evolution as a filmmaker. 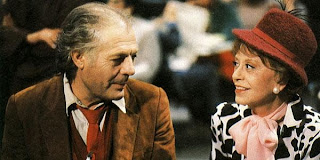 Ginger and Fred (1985)
Fellini's final film with Masina unites her with his other major collaborator, Marcello Mastroianni, playing a former music hall act reunited for a TV special. The film is steeped in nostalgia and feels like a swan song for Masina (she would go on to star in one more film, but not for Fellini), who 45 years after she first appeared onscreen for Fellini, proves to be as charming and charismatic as she was at the beginning. Although the film is probably considered "lesser Fellini" by most (though, really, given how great his top tier films are, being "lesser" to those isn't sharp criticism), it's a joyful piece of work that brings a multi-decade partnership to a nice close.

There's a lovely kind of circularity to the Fellini/Masina partnership, which began with a story about performers and ends with one, too. Although Fellini had many other actors that he worked with on a regular basis, and despite Masina's absence from some of the director's most revered films, their work together can't be seen as anything other than crucial because even when she wasn't appearing on screen, she was usually there in some respect because Fellini was a filmmaker who drew so heavily on his own life, experiences, and fantasies.

Next Time: Herzog & Kinski
Posted by Norma Desmond at 8:00 AM