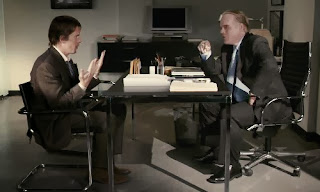 #5: Before the Devil Knows You're Dead
A crime drama centering on an enormously dysfunctional family, Before the Devil Knows You're Dead finds Hoffman playing the ruthless, bullying elder brother to Ethan Hawke and absolutely dominating the film from one end to the other. Although the character is pretty cold blooded - his scheming essentially tears apart his entire family - Hoffman mixes enough humanity and desperation into his portrayal to make the character far more than just a monster of greed and hubris. 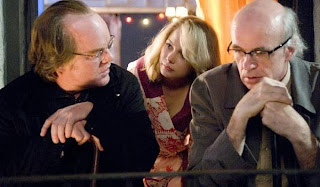 #4: Synecdoche, New York
Charlie Kaufman's Synecdoche, New York is a challenging piece of work, but Hoffman's deeply felt performance makes for a solid point-of-entry. As Caden Cotard, he plays a playwright who turns so far inward in his efforts to hit at real human truth that his play, and by extension his life, essentially becomes a hall of mirrors. The film relies heavily on absurdity, but Hoffman's performance is never anything but serious, a rich depiction of a man so intent on capturing life that he looses his ability to live it. 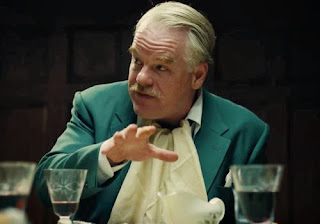 #3: The Master
As the leader of a movement known as "The Cause," Hoffman delivers a commanding and charismatic performance. He's perfectly believable as "the master," someone who can inspire the adulation of those around him, while also being perfectly believable as someone at the complete mercy of his own master, his weaknesses easily slipping up to the surface and taking over. There's not a moment in this performance that isn't brilliant. 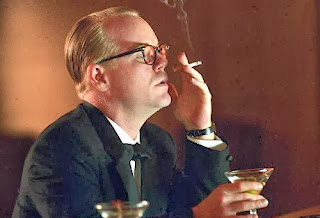 #2: Capote
With biographical films, there's always the risk that the actor playing the historical figure will fall into the trap of mimicry rather than turning in a performance. That isn't the case with Hoffman in Capote, the film for which he won the Oscar for Best Actor and in which he hits the mannerisms and speech patterns of Truman Capote, but continues to dig deeper, allowing the film to become a rich exploration of the relationship between an artist and his art, and the moral compromises that sometimes go into creating such art.

#1: Boogie Nights
Boogie Nights is the film that brought Hoffman onto a lot of people's radar and it's easy to see why. His intensely vulnerable performance as a perpetual outsider desperate for acceptance is moving and incredibly nuanced, a fully immersed portrayal of a man deeply uncomfortable in his own skin. There's no other word for it but perfect.
Posted by Norma Desmond at 8:00 AM