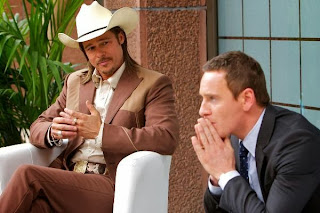 It's easy to see why Ridley Scott's The Counselor landed with such a thud (both critical and commercial) when it arrived in theaters last fall. It's an aggressively inaccessible film, savagely violent in some places, thick with talk in most places. I admire the film for its confidence; mainstream films (and given its cast and its director, The Counselor qualifies as mainstream), even the good ones, usually seem like they've been put together by committee, designed to appeal to as many people as possible, but The Counselor has the courage to be its own animal and do its own thing. It's bold, it's fascinating, and it doesn't entirely work, but when it fails it does so on its own terms and there aren't a ton of movies you can say that about.

Michael Fassbender is "the Counselor" - never named, the better to suit his everyman gone down a bad road persona - a lawyer whose greed gets the better of him, leading him to get involved with Rainer (Javier Bardem) and Westray (Brad Pitt) in a drug deal that promises a high return. Newly engaged to his girlfriend Laura (Penelope Cruz), the Counselor is riding high on the idea of the easy money coming his way, but that happiness is brief. While visiting one of his clients (Rosie Perez) in jail, he agrees to help her son get out of a speeding ticket, not realizing that her son is a man known as "the Green Hornet," a member of the drug cartel with whom the Counselor is dealing through Rainer and Westray. When the Green Hornet ends up dead and robbed of his cargo (a component which will allow the truck carrying the drugs to start), the cartel zeroes in on the Counselor because, as Westray somewhat gleefully informs him, they've heard of coincidences but don't necessarily believe in them. The clock is now ticking and the Counselor, despite his belief that he can find a way to slip out of it, is clearly out of his depth.

He goes to Rainer hoping for help, only to be informed that it's too late: once you've been marked by the cartel, you're as good as dead. Like the Counselor, Rainer and Westray have been marked as well, with the latter making the escape he's long been preparing for, but the former sticking around to his own peril. Unknown to any of them is that the architect of their misfortune is Malkina (Cameron Diaz), a cheetah obsessed diamond expert/straight up crazy person and Rainer's live-in girlfriend. Like the Counselor, she believes that she has some easy money coming her way when she hires some goons to steal the drug shipment but, also like the Counselor, her plan goes awry when the cartel manages to get the drugs back. Fortunately for her she's been successful enough in covering her tracks that she doesn't have a target on her back. The same cannot be said for the Counselor, whose attempt to get away clean with Laura will bring him to a fate worse than death.

Befitting its subject matter, The Counselor is an incredibly violent film. Not violent in the sense of frequency, but in gruesome, unflinching intensity. The final act, in particular, is not for the faint of heart as several characters meet spectacular ends. But, for the most part, The Counselor favors talk over action, and understandably so given that the screenplay is from Cormac McCarthy. The talkiness of the film works in some respects - the now notorious scene in which Rainer describes the night that Malkina had sex with the windshield of his car works because of Rainer's still baffled reaction to it (and how thoroughly Bardem sells that reaction) - but for the most part this is a film where you can really hear the writing, which gives it an overly artificial feeling which is somewhat at odds with the stark, unforgiving realism of its violence. The characters meditate and brood over the story's themes, and while some of these scenes contain gems in terms of dialogue, many of them are too overwritten to actually connect despite the efforts and considerable talent of the cast.

In the titular role Fassbender is a solid anchor for the film, depicting a man who simply gets in way over his head and, despite repeated warnings about what he's in for, fails to realize how deep he's in until it's too late. His growing desperation as the film advances towards its finale, is the closest thing the story has to a human face, while Cruz is given the difficult and thankless task of portraying pure innocence consumed by the world's evils. The two characters are simultaneously the most affecting and least interesting, surrounded as they are by characters who are colorful enough that they come just to the edge of campiness before being reigned in by the film's dark tones. In the small role of Westray, Pitt gives the sort of finely tuned character performance that he excels at, while Bardem and Diaz play characters whose outward showiness mask hard, cold centers. They look like peacocks but they're really jungle cats, circling their prey. Appropriate for a story that ultimately comes down to survival of the fittest.
Posted by Norma Desmond at 8:00 AM