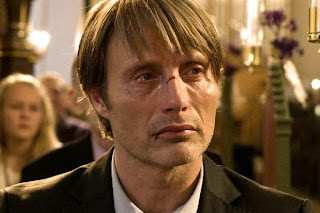 "The world is full of evil, but if we hold on to each other, it goes away." There is evil in the world, but sometimes its in the holding on to each other, the closing of ranks against another in the name of "justice," where evil truly takes root. Thomas Vinterberg's The Hunt is about a man singled out by a community eager to mete out the punishment that the criminal justice system might be too slow to satisfactorily bestow, never pausing to try to look beyond their own sense of righteousness to consider that one of the reasons that the criminal justice system can be slow is that, ideally, the right person will be charged with the right crime - if, in fact, there even is a crime. It's an intense and taut film, well constructed and emotionally engaging, even if its central conceit is built on a straw man argument.

In a small Danish community, Lucas (Mads Mikkelsen), recently divorced and struggling to preserve his relationship with his teenage son, having lost his previous job due to a school closure and now working at the kindergarten as support for the teacher, is struggling to put his life back together. Although he has a wide circle of friends, including his best friend Theo (Thomas Bo Larsen), his life is somewhat lonely as the film opens, gradually becoming less so as his son announces his intention to come live with him, and as he begins a relationship with Nadja (Alexandra Rapaport), a woman who works at the kindergarten. His window of happiness, however, is brief as Theo's daughter Klara, who is one of the students in the kindergarten, develops a crush on Lucas and, after being gently rebuffed by him, makes a comment to a school administrator which leads to suspicion that something untoward has happened. Later, under the pressure of questioning by the administrator and a man she brings in to speak to Klara (who, if he is a child psychologist is the worst child psychologist ever, given that he does everything you can do wrong when questioning a child), Klara confirms to them that Lucas showed her his genitals, not capable of understanding that by doing so, she's taken a match to a powder keg.

Lucas is dismissed from his job and the school wastes no time in spreading word to the community about what he's allegedly done, contacting the parents of the children long before the police are even brought in to investigate. Lucas is immediately declared guilty by the court of public opinion based on nothing more than the idea that children "don't lie," and he's ostracized by the small community, terrorized by vigilantes, his life slowly torn apart piece by piece. Other children from the kindergarten are questioned and state that Lucas molested them in his basement, though in fact Lucas' home does not have a basement, and Klara tells her parents that she lied when she told the story about Lucas, only to have her mother tell her that she just doesn't remember what happened because it was so traumatic. What's done cannot be undone and as the film heads towards its haunting final moments, it confirms that regardless of whether Lucas is able to officially clear his name, regardless of how much of his "normal" life he's able to claw back, the allegation is always going to be there, hanging over his head.

In creating the story, Vinterberg relied, in part, on pieces of actual stories about false allegations of child sexual abuse and false memory syndrome, and in watching it it's difficult not to think of stories about the 1980's hysteria surrounding ritualistic sexual abuse and Satanic cults in day-cares. A number of those cases are based on evidence which, in hindsight, seems highly suspect at best and grossly tainted at worst, and the "evidence" in this case is no different, as it's basically manufactured out of nothing by adults all too ready to be whipped into a sense of moral panic and outrage. The way that Lucas is treated by his community is deeply upsetting, especially as things escalate to violence, but while this is part of the film's narrative strength, it's also part of the film's thematic weakness. The film is deeply critical of the blind herd mentality of the community, but because the audience knows that Lucas is innocent, the real issue is obscured. The community's embrace of vigilante justice would be wrong regardless of whether Lucas is innocent or guilty, and by making things so clear cut the film takes an easier road. It's easy to empathize with Lucas because of the lack of ambiguity around him; it would be a greater challenge to inspire outrage about lynch mob mentality if there were any real question of Lucas' guilt. Arguing for the rights of someone you know to be innocent is simple; arguing for the rights of someone you think may be guilty is more complicated.

That said, although I think The Hunt ultimately comes to it in the least complex manner, it can't be denied that the film hits a real emotional chord and unfolds in a powerful way. Mikkelson, an actor who has been slowly but surely rising to prominence over the last decade, proves himself to be an effective and compelling leading man, providing the film with a solid center that it can build around. His quiet, steady performance is vital to the film's success, evoking our sympathy rather than demanding it, and making the story all the more devastating.
Posted by Norma Desmond at 8:00 AM