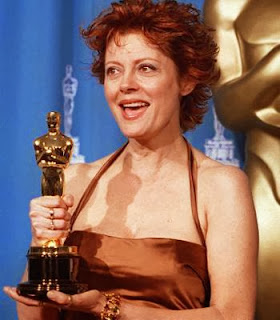 Oh, don't think it doesn't hurt me to say so. Susan Sarandon is awesome. She's an actress who has been well-praised and yet still somehow seems just a bit underrated, at least lately. She was never a huge box office draw, but if you look through her filmmography, there are a lot of really interesting films and choices there, some purely "prestige," some fairly commercial, but there's a wide variety of character types and film genres, and a ton of praise worthy performances. The early 90s seem to have been the sweet spot in Sarandon's career, a period in which she earned four of her five Oscar nominations and her one win, at which point the really interesting roles seem to have dried up, leaving her with nothing to play but wives and mothers. Come on, Hollywood. We all deserve better than for Susan Sarandon to be playing the sorts of parts that any actress "of a certain age" could play.

Sarandon got her break in 1970's Joe, a film which doesn't seem to be talked about much today but which, at the time, was both critically and commercially well-received. Although a fair number of the films she made in the 1970s have sort of fallen off the pop culture radar, she was in some fairly high profile projects, including The Front Page, directed by Billy Wilder and starring Jack Lemmon and Walter Mathau, the Robert Redford-starring The Great Waldo Pepper, the notorious Louis Malle film Pretty Baby, and The Rocky Horror Picture Show, one of the most enduring cult classics ever made. With the solid foundation of her work in the 70s leaving room to build on, the 80s started well with her performance in Atlantic City, for which she earned her first Oscar nomination as Best Actress. She would then fill out the 80s with a wide variety of films, including a modern-day interpretation of The Tempest, Tony Scott's horror/vampire classic The Hunger, the Apartheid drama A Dry White Season, and the critical and commercial one-two punch of The Witches of Eastwick and Bull Durham.

By the early 90s, Sarandon's two decades of hard work, and demonstrated versatility, started to gain her some much deserved Oscar notice in the form of Best Actress nominations for 1991's Thelma and Louise (a seminal film still worthy of discussion, judging by the number of articles that were published to mark its 20th anniversary), 1992's Lorenzo's Oil, 1994's The Client and 1995's Dead Man Walking, for which she ultimately won the award. She also starred as the matriarch of the critically and commercially well-received 1994 adaptation of Little Women. Although Sarandon's career always seemed to move between low key and high profile projects, as soon as she got her Oscar, the interesting/challenging roles came to an abrupt halt and for the most part, ever since, she's been stuck in the supporting ranks playing either the mother of the protagonist (Igby Goes Down, Elizabethtown, Mr. Woodcock, Middle of Nowhere, Leaves of Grass, The Greatest, Jeff Who Lives At Home, and Speed Racer in which she is credited as "Mom Racer") or the wife (Shall We Dance, In The Valley of Elah, Solitary Man, and Arbitrage, as well as a slight variation on the type in Stepmom where she plays the ex-wife to the protagonist's husband). This isn't to say that the period has been completely devoid of more interesting roles - performances in films like The Banger Sisters and Alfie, whatever the flaws of those films, tap into the kind of innate sensuality of Sarandon as a performer, in Enchanted she got a play a wicked Queen in a live-action Princess story before that sort of thing became de rigueur, and Cloud Atlas gave her several small but varied characters to play. However, she also starred in the Adam Sandler movie That's My Boy (which has a super gross premise, even for a Sandler movie) and last year's The Big Wedding, a film which is perhaps best described as aggressively awful.

I'd ask what happened to Sarandon's career, but I think it's fairly obvious. Despite being a creative industry, Hollywood doesn't have any imagination when it comes to women over 40 and thus has little use for actresses beyond that age. In that respect, Sarandon's career was already on borrowed time when she won the Oscar, seeing as she was 49 when she claimed it. A shamefully small number of actresses manage to make it beyond 50 while still getting starring roles in high profile films - it's basically Meryl Streep and Helen Mirren (you could also make an argument for Judi Dench, but I'd say that her career is an anomaly since she was already in her 60s by the time she became really well known outside of the UK). So while there's a sense that Sarandon is a victim of the Oscar curse - after all, AMPAS nominated her a bunch of times in succession then promptly forgot about her once they'd given her the award - I'd say that it's more like she's a victim of Hollywood not recognizing or properly using the talent at its disposal. Really, all things considered, it's a miracle that AMPAS had the good sense to reward Sarandon while they could.
Posted by Norma Desmond at 8:00 AM