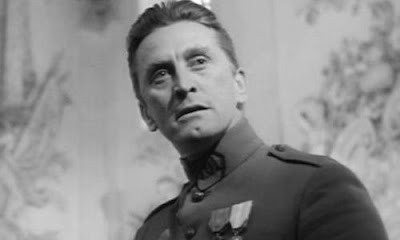 There are a number of performances from Kirk Douglas that would qualify as "unsung" but the lack of recognition for his work in Paths of Glory (not to mention the lack of recognition for the film in general) is particularly egregious. His performance as the crusading Col. Dax, fighting an unwinnable battle against the military hierarchy, is easily one of the best of his long career.

Set during World War I, Paths of Glory is essentially about class warfare. In it, French officers (who come from society's upper echelons) use the enlisted men as pawns, objects that can easily be sacrificed either to gain glory for the officer or to take the fall for his mistakes. In this world, a man like Col. Dax is decidedly out of place. When approached by his commanding officer Gen. Mireau and informed that he's to lead an attack on "the ant hill," he knows that the success of the mission is next to impossible but he accepts the task because Mireau is determined to make it happen and Dax would be loathe to force his men to follow someone else into what is almost certain death. His sense of justice, however, is offended by Mireau's offhand remark that half the men are likely to die in pursuit of the objective - unlike Mireau, Dax recognizes the men as people rather than numbers.

The mission is an utter failure and, in an attempt to save face for having ordered it, Mireau blames the inherent cowardice of the soldiers and orders that three of them be executed. Recognizing this gross injustice, Dax insists on representing the men at their trial, though the results are a foregone conclusion as far as nearly everyone else is concerned. Douglas is at his most skillful in the trial scene, in which he must play Dax as contained and respectful in the face of his superiors while also making it clear that he knows what is happening is wrong and that it not only upsets him, but disgusts him.

Dax's rage only grows in the scenes following the trial, even though he's able to deliver payback to two of the film's villains. One is a lieutenant whose cowardice brought about the death of one man during a night patrol, and who uses the opportunity to pick a soldier to be executed to cover that earlier incident up by picking the only other person who knows what happened during the patrol. Dax knows what he's done and settles the score as best he can by choosing the lieutenant to take charge of the executions, forcing him to face what he's done. The lieutenant tries to weasel out of it but Dax is firm and the mock-friendliness with which he delivers the order is chilling. The lieutenant is the only person he deals with to whom he can actually met out some form of punishment, and Douglas puts so much bite into the scene that you almost feel bad for him.

Mireau gets his comeuppance with the help of his superior Gen. Broulard, the man who put the idea of taking the ant hill into his head in the first place and who insists to Dax that he's the only person in the situation who is completely innocent. After Mireau shuffles off to receive his own punishment - a punishment that will likely have more consequences in the court of public opinion than anywhere else - Broulard makes the mistake of congratulating Dax, assuming that he has outmaneuvered Mireau in order to get his job. At this point, Dax has reached his limit and Douglas begins to let go of some of the anger that has been bottled up inside the character for so long. The games these people make of human lives disgust him, but as Broulard persists in his failure to see his own fault, Dax comes to an important realization. Being angry at men like Broulard or Mireau is useless because they simply aren't capable of seeing how inhuman their actions are. They are worthy of scorn but more than that, they deserve pity for their lack of humanity.

The final moments of the film are quiet for Dax. He's spent his rage and realized its futility and all he can do now is lead what's left of his men as best he can. Throughout the film - particularly in a scene where Dax marches through the trench - Douglas' silence says more than words ever could, his expression grim but determined. Douglas carries the film ably, creating a strong sense of morality at its centre. It's a must see performance in a must see film.

I saw this a couple years ago when a theater near me was showing Kubrick movies. It instantly became one of my favorite Kubrick movies. Kirk Douglas gives such a great performance and it is such a well told story.

It's an absolutely brilliant film. One of Kubrick's best.