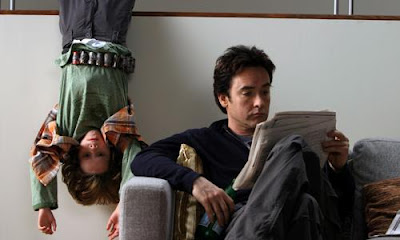 Being normal is highly overrated, though conformity may occasionally make life a little bit easier. Martian Child, adapted from a novel by David Gerrold which is itself based on his own experiences as a single parent, is about defining the line between creativity and conformity, between fantasy and reality. The film is very sentimental and predictable, but it has a lot of charm and is anchored by great performances - though, it must be said, this is a terrible waste of the considerable talents of Anjelica Huston.

John Cusack stars as David, a science fiction writer and recent widower. Before her death, he and his wife had been going through the process of adoption and now there is a child waiting for him. David is reluctant to go through with it - the loss is still raw and he isn't sure he can be a parent on his own - and only becomes more so when he learns that Dennis (Bobby Coleman), the child in question, is a socially withdrawn boy who insists that he's from Mars and spends all day inside a cardboard box. David believes that there's no way he could handle a kid with such intense needs but, at the same time, feels drawn towards him. Through a series of visits David and Dennis begin to form a tentative bond and David comes to believe that he might be able to make it work after all.

Dennis moves in with David and David struggles to close the distance between them. He humors Dennis' belief that he's from Mars and tries to help him negotiate social interactions, though he isn't always successful. Dennis gets expelled from one school due to his compulsion for stealing things and the adoption agency is uncertain as to whether David truly is capable of caring for the boy. There are two big crises in the story. First, when the agency threatens to remove Dennis, an event which is averted when Dennis is able to successfully "pretend" to be normal. Second, when David makes it clear that Dennis' martian act is something that should only be indulged at home and Dennis, feeling rejected once again, decides that it's time to leave Earth behind and go home.

The various turns that the plot takes will come as no surprise to even the most casual film viewer - this tale of unconventional people unfolds in very conventional fashion. However, the film itself is comfortable within the confines of its genre and doesn't try to overreach, rather it simply aims to excel at the kind of story that it is. We know that eventually David will find love with his ever present female friend (Amanda Peet) and we know that when the advanced age of David's dog is referenced, things are going to take a sad turn, but the film really doesn't pretend that it's getting away with anything and pretty openly acknowledges the strings it wants to pull. It isn't a great film by any stretch, but it's a good film of its kind.

What really works well in Martian Child are the performances, Cusack's in particular. David is a man going through a lot, with a lot of wounds waiting to heal over, and Cusack does an excellent job at conveying his struggles both as a man in mourning and as a man trying to forge a new, and very difficult, connection. This is easily one of his best performances, one that hits a lot of different notes and makes them resonate. Coleman's performance is at times a bit too precious for my tastes but I'm not going to rag on the acting abilities of a ten-year-old, so let's move on. Huston appears briefly as David's publisher and Joan Cusack - always a welcome presence - co-stars as David's sister, both making the most of their rather limited roles. Martin Child won't surprise you, but it's one of those easy, undemanding films that can make for a good viewing experience.