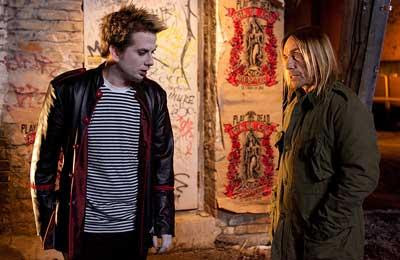 I've been racking my brain trying to figure out the best way to describe Suck and I think it's thus: It's like The Rocky Horror Picture Show and Bram Stoker's Dracula had a baby and allowed it to be raised by Dracula: Dead and Loving It. It's a horror-comedy-musical (not necessarily in that order) with style to spare and cameos from Alice Cooper, Iggy Pop, and Henry Rollins, plus Moby playing hilariously against type.

Writer/director Rob Stefaniuk stars as Joey, frontman of the fledgling rock band The Winners, which also includes bassist Jennifer (Jessica Pare), guitarist Tyler (Paul Anthony) and drummer Sam (Mike Lobel). Things are not going well for the group. In fact, things are going so badly that their manager, Jeff (Dave Foley), quits and suggests that they give Japanese hip hop a try (It's going to be huge). To make matters worse, after a show in Montreal Jennifer disappears with a freaky looking guy who turns out to be a vampire named Queeny (Dimitri Coats). When Jennifer finally catches up with the guys in Toronto, it's immediately apparent that something is very different about her, something glam and ethereal that captivates the audience that night. The band starts to develop a following, but only because people are so intrigued by Jennifer.

At first Jennifer tries to keep her vampirism a secret, though that becomes difficult after she devours a convenience store clerk during a rest stop. She enlists the band's roadie Hugo (Chris Ratz) to be her helper, forcing him to dismember the bodies after she's killed someone and promising that one day she'll make him a vampire, too. However, after she kills Beef (Moby), the frontman of another band, her secret is out and Joey makes her promise to stop killing people, insisting that if she's hungry they'll stop and she can feed on a cow or something. He also makes her promise not to turn anyone else in the band. Neither of these promises are kept and soon the entire band is made up of vampires and they're rocketed to stardom. The only problem, aside from the moral complications that seem to plague only Joey, is that there's a vampire hunter on the loose (Malcolm McDowell) and he's pretty determined to rid the world of vampires in order to avenge the death of his girlfriend decades earlier.

Suck is pretty high on camp. It would have to be in order to work. It plays on the Dracula mythology - the vampire hunter is named Van Helsing (Eddie Van Helsing) and Hugo is very much a Renfield figure right down to eating flies - and also on the more general rock star mythology, particularly the trope of the talented musician felled by the excesses of stardom. Vampirism here is so closely likened to drug addiction that when Tyler asks Jennifer to turn him, he argues that she ought to since he always shares whatever he's holding with her. She argues that it's hardly the same, but his reasoning ultimately does convince her to let him share in her new lifestyle. Further, vampirism isn't envisoned as a permanent state of being since Van Helsing insists that once he kills the Vampire Queen, all the other vampires will be released and become human again, thus kicking the habit. Vampirism as drug isn't really a new idea but the film pulls it off well enough that the concept doesn't seem derivative or tired.

I went into this movie not really knowing much about it and not knowing what to expect and I really enjoyed it. It doesn't take itself too seriously in terms of tone and it's very well-made in terms of construction. The only real criticism I have of it is that the ending is a bit abrupt, rushing through the events that will motivate the band to want to give up the glamour and fame in order to be human again. Other than that, though, it's a pretty cool movie that I look forward to watching again.