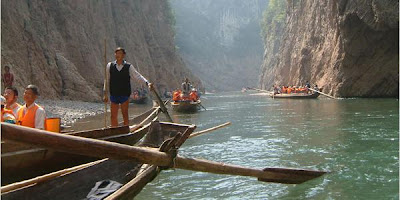 Yung Chang's haunting documentary Up The Yangtze tackles a couple of themes. At the top it's a film about generational divide, about the impossibility of experiencing the world your grandparents or even your parents knew. Beneath that, it's a film about the human cost of progress and industrialization. Late in the film, when a shopkeeper breaks down in tears lamenting how hard it is in China for "common people," you'd have to have a heart of stone not to be moved. It's one of many powerful images and moments in this truly great film.

The subject of Up The Yangtze is the building of the Three Gorges Dam and is inspired by Chang's desire to see the China his grandfather left behind before it changes forever. Of course, things are already vastly different, and cruise ships sail up the Yangtze to give tourists the opportunity to experience the changing Chinese landscape as well. Part of the film takes place on one of these ships, though the tourists themselves are never more than background. In the foreground are two teenagers from different walks of life learning where they will belong in the shifting social and economic framework of their country.

First we meet Yu Shui, a girl who has just finished middle school and longs to go on to higher education. Her family is poor - they live in a shack on the water's edge - and her father cautiously tells her that she can go to school later, for now the family needs her to be working. The look of supreme dejection on her face suggests that she knows this probably isn't true, that if she starts working now education will forever remain a far away dream, but what can she do? The family can't afford to send her to school anyway and she's sent to work on a cruise ship. Her departure is unhappy and on the ship - where she's renamed "Cindy" for the benefit of tourists - she feels isolated and, perhaps, ashamed of the extreme poverty from which she's come. Eventually she will make friends and become more comfortable in her surroundings and her English will be good enough that a promotion to working in the ship's dining room seems feasible. When she sees her parents again the distance between them is heartbreaking - she looks at them almost as if they're an alien species.

The other teen is a boy named Chen Bo Yu, who comes from a markedly different economic situation than Yu Shui. We meet him as he hangs out with friends, buying them drinks and bragging about the money he'll make on the ship. Later, on the ship, he brags that with tips - which he has become a master at gathering, having learned which kinds of tourists are the best tippers and how to focus his concentration on them - he makes more than both his parents. He's arrogant and convinced that he's got it all figured out. Imagine his surprise when, towards the end of the film, he's informed that his work isn't to the standards of the ship and that he's being let go.

Chen Bo Yu - or "Jerry" to the tourists - is a smaller part of the film than his female counterpart, partly because the situation her family is in is more closely related to what the film wants to explore. Once the dam is completed, the water will rise, and the family will have to be relocated. This happens towards the end of the film and the parents state that while their accommodations are nicer, things will be more difficult because when they lived at the water's edge they could grow their own vegetables whereas now they'll have to go to the market and buy them. The ability to grow their own food is probably the only thing that's kept the family going as long as they have - the father is so thin he looks positively skeletal - so this is no small thing but at least now Yu Shui is bringing home some money, which should help a little. The dynamics of this family, more than anything else, really drives this film, becoming its heart. The daughter resents the incredible responsibility on her shoulders and the sacrifice of her educational dreams; the mother weeps that if they had a choice they would do anything before asking their daughter to support them; the father is quiet and tries to keep the peace and retain some small measure of dignity. Meanwhile, the country marches forward, sweeping them and people like them out of its way.

Chang approaches his subjects in a way that seems easy and relaxed but he's actually exercising very tight control over his narrative and he crafts it splendidly. Up The Yangtze isn't overtly political - though it does quietly highlight some of the corruption involved in the government's relocation of people along the water's edge - finding its interest instead in human drama. The film ends with a series of shots of the place Yu Shui and her family once called home. The water rises and rises, getting closer and closer to the shack, and then finally rises above it, wiping out all traces. It's the kind of sequence that stays with you and it packs a hell of a punch.

I'm glad you enjoyed the movie. I saw it a couple of years ago and was impressed with how earnest it was. It's stayed with me till this very day. Have seen any other of the director's work?

I found that this is a documentary very informative and well done and I encourage anyone who wants to see changes and the impact of this questionable project nationwide.

There are a series of interviews throughout the film, which reveals a darker side than you might think. This is especially bitter in an interview aboard the dealer have the same heated argument goes out.