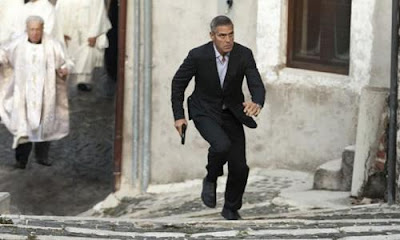 Patience. Precision. Craftsmanship. All are words that could describe The American both in terms of form and content. It is a slow movie and quiet, which won't appeal to everyone, but it's beautifully shot and well-acted so hopefully audiences will give it a chance because it definitely deserves to be seen. Anton Corbijn's old school style thriller, based on a novel by Martin Booth, is a perfect way to kick off the fall movie season.

George Clooney stars as Jack, or possibly Edward, an assassin who finds that he himself has become the target. He flees to Rome to discuss the situation with his boss, Pavel (Johan Leysen), and is sent to a small village to wait things out. After a quick look around, Jack opts for a different village and tosses the cell phone Pavel has provided for him - even his allies can't be trusted in a time like this. Jack keeps in touch with Pavel through payphones, which is how he ends up with a new assignment, one which he later decides will be his last.

He meets with a woman named Mathilde (Thekla Reuten) and then gets to work on a custom-made gun according to her instructions. Most of his time is spent on the assignment and in dodging people he's certain are out to kill him, but he also has time to make connections with people in the village. One is the local priest (Paolo Bonacelli), who recognizes Jack as a man with a troubled soul and reaches out to him, one sinner to another. The other is Clara (Violante Placido), a prostitute with whom Jack gradually develops a relationship, even though the events of the film's opening moments have taught him how dangerous such connections can be.

We know, due to the benefit of storytelling logic, that either Mathilde or Clara will ultimately betray Jack. It is to the film's credit that it keeps us guessing who it will be as long as it does. There are two scenes that take place in a secluded area by a lake - one with Mathilde, the other with Clara - that are so fraught with tension that all you can do is hold your breath and wait for the boom to drop. The American is a film built on that kind of tension, making you wait for the payoff. An argument could be made, I suppose, that "nothing" happens in this movie, but I would have to respectfully disagree. It's a cerebral and very interior story but there is a narrative progression that is taking place and I found it totally engrossing.

Corbijn, who began his career as a photographer, has a fantastic eye for composing shots and that, in conjunction with the cinematography of Martin Ruhe and the fact that the location itself is stunning, makes this one of the most beautiful looking films I've seen in quite a while. The American is Corbijn's second film, his first being Control, a biopic of Joy Division frontman Ian Curtis. I was pretty keen on Control, too, so I can't wait to see where Corbijn goes from here. He's a great director in terms of style while at the same time he doesn't let style overwhelm the content of the story.

As for Clooney, his performance here is probably the best I've ever seen from him. Like the film itself, the performance is very quiet and Clooney has to suggest a lot more than he ultimately reveals. I don't know that we ever truly get to "know" Jack, but I found Clooney to be very effective in the role, articulating a great deal through little more than subtle shifts in his expression. I don't know that The American is high profile enough to get Clooney much attention from the awarding groups at the end of the year, but he'd definitely deserve it.

(Way off topic, so feel free to delete this)

Just curious - will you be attending TIFF this year? Drop me an email and lemme know, I'd love to find a moment to say hello and put a face with the name.

wow, what a wonderful review! i've always been weary of the one-note clooney syndrome but i when this movie hit number one i was intrigued. thansk for he review!