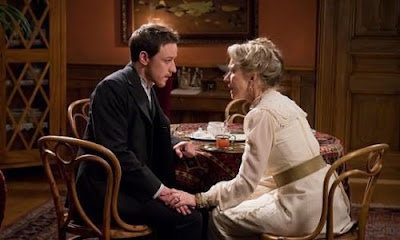 The Last Station is one of those movies that was on my radar last Oscar season but slipped through the cracks due to the volume of quality films released at about the same time. As much as I love an ornate costume drama, I'm kind of glad I put this one off as long as I did because, while I liked it quite a bit, it didn't blow me away. It's a decent movie but nothing particularly special.

One of the principles that Tolstoy advances is celibacy, which Valentin takes to heart until he meets Masha. Since Tolstoy himself hardly adheres to this principle, this laspe is really only a minor flaw in Valentin's vision of the ideal. The bigger problem is that Vladimir and Sofya are at odds with each other over Tolstoy and what will become of his legacy once he dies, and Valentin finds himself leaning more towards Sofya's side. As secretary and, in many ways, confidante to the increasingly lonely and isolated Sofya, he is privy to many of the ins and outs of the Tolstoy marriage. He sees the pain suffered by both Sofya and Tolstoy over the rift in their long and, for the most part, happy marriage and though he understands Vladimir's position - which includes making Tolstoy's works public domain - he finds that his sympathy increasingly lies with Sofya.

The story unrolls easily, starting out with more of a comedic bent and gradually becoming more dramatic as it gets closer to its sad conclusion. That being said, the film doesn't delve quite as deeply as it might have. Tolstoy is a towering historical figure and The Last Station doesn't really live up to his legend. As a study of the woman behind the famous man and her struggles in the face of his fame, however, it's a bit more meaningful. Sofya is considered selfish by Tolstoy's entourage but as a viewer it's easy to feel for her. Her husband, to whom she has devoted her life, for whom she copied the manuscript for War and Peace seven times, has slipped away from her in his final years, seemingly having replaced her with Vladimir, whose photo adorns the wall above his desk. Their power struggle, which is occassionally as much about Valentin's loyalty as about Tolstoy himself, drives the narrative, though the two characters have relatively few scenes together.

The thing that The Last Station really has going for it is the acting. As Sofya, Mirren truly is a commanding presence and though her actions sometimes border on farce, she's such a forceful character that you still take her very seriously. As Tolstoy, Plummer is a match for her at every moment and between them they convey the lifetime that their characters have spent together. The best scenes are the ones between Mirren and Plummer and it's really no wonder that they received Oscar nominations for these performances. I think the film is worth seeing for Mirren and Plummer (and, to a lesser extent, for McAvoy who renders an earnest and thoughtful performance as an idealist confronted with the reality of his ideals), but apart from the actors, there's nothing about the film that makes it anything more than merely adequate.

The Last Station is a concrete offer for a nomination for best picture. It is a wonderful film full of heart, love and grief. The lure of the film will draw you in and probably leave you in tears.