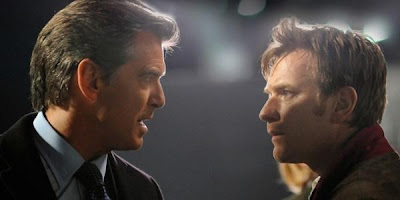 There is something sinister lurking at the edges of The Ghost Writer. Director Roman Polanksi establishes it immediately and then maintains it for two hours, masterfully demonstrating how much more important mood is than action in a thriller. Factor in a great cast and the story's thinly veiled, but nevertheless intriguing, portrayal of Tony Blair (or should I say "Tony Blair"?) and you've got a film worth making note of.

The ghost writer, unnamed in the film and played by Ewan McGregor, has been hired to re-draft the memoirs of former British Prime Minister Adam Lang (Pierce Brosnan) and to do it quickly so that it can be rushed into print. His predecessor has just died under mysterious circumstances (officially called a suicide) and the manuscript he left behind doesn't quite cut it for the publishers. When he arrives at Martha's Vineyard to begin working with Lang, the Ghost reads the manuscript and discovers the problem: it's dry and dull and lacking heart. He begins interviewing Lang in order to get at the man behind the policies but the process is derailed when Lang find himself in the middle of a political firestorm, charged with war crimes for allegedly handing over British citizens to the CIA to be tortured.

Lang flees to Washington for a few photo ops with the U.S. administration while the Ghost cools his heels in Martha's Vinyard, working on the book and also beginning to look into his predecessor's death. He finds evidence, discovered and hidden by the first ghost, which reveals that Lang is lying about how and when he became politically active; he learns that the body of the first ghost shouldn't have washed up where it did on the beach and that a woman who saw flashlights in the area that night fell into a coma after giving a statement to police; he learns of a connection between Lang and a rumored CIA operative. Just what, exactly, has he stumbled into and what secrets are hidden in the original manuscript?

Polanski keeps the audience on our toes by allowing a feeling of menace to permeate every part of the film. From the dark color pallet which relies heavily on greys, to the cold, sleek interior design of the Martha's Vinyard house, and the forbidding aura of everyone who seems to surround Lang, every element of the film just leaves us waiting for the other shoe to drop, for the Ghost to finally (and fatally) fall into the trap which has been set. Even the simple act of a note being passed through a crowd is imbued with a sense of doom. Whatever your feelings about Polanski as a person, it can't be denied that he's a skilled director. This a film guided by someone confident in his ability to craft and tell a story and the result is totally engrossing. From a techinical perspective, I think The Ghost Writer is about as close to perfect as a film can get and that final scene is positively exquisite.

As far as the performances go, there isn't a weak link. Brosnan's Lang is elusive, a man who doesn't want facts to spoil a good story and who, despite his success, is still yearning to be taken seriously as a politician. He is dependent on his wife, Ruth (Olivia Williams), who acts as his most trusted advisor and yet he jeopardises that relationship through an affair with his assistant (Kim Cattrall) - a secret so open that Ruth has no qualms about angrily alluding to it in front of a room full of people. As Ruth, Williams plays the story's wildcard, the political wife who seems better suited to the job than her husband and whose motivations aren't always clear (at least on first viewing). She's the mystery within the mystery and Williams' performance is fantastic.

McGregor is great, too, though the role, by its very nature, is more muted than those that surround it - the everyman who finds himself in extraordinary circumstances that he doesn't fully comprehend will always be a little less interesting than the rogue's gallery that surrounds and impedes him. Still, McGregor is able to bring both a weariness and a wariness to his performance which helps ground the story and keep it moving forward, and the mixture of helplessness and nonchalance with which he plays a seduction scene is one of the film's lighter and more memorable moments. One of the things that ultimately makes the film so gripping is that the Ghost is so likeable that you really don't want something bad to happen to him and that threat of something bad seems to underscore even the most innocuous scenes. While watching The Ghost Writer, I couldn't help but think to myself, 'This is how you do it.'

*side note: thinking about it afterwards, I found myself nagged by thoughts that there is no way that Olivia Williams is old enough to be playing her character. IMDB confirms that at the time her character is said to have been at Cambridge, Williams hereself was actually about 4. Ah, the magic of movie reality!