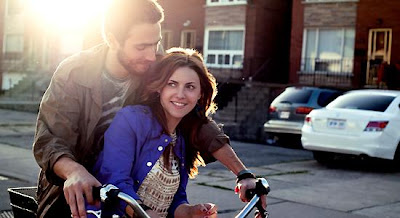 This may come as a shock, but I see a lot of movies. As such, it's not very often that movies surprise me, at least in terms of plot movements. The last 5 or 10 minutes of This Movie Is Broken really caught me off guard - I totally did not see that coming. Well done, Bruce McDonald.

This Movie Is Broken is made up of two parts. One is an unrequited love story between Bruno (Greg Calderone) and Caroline (Georgina Reilly), the girl of his dreams who, even when she's within reach, still always remains somehow just out of reach. The other part is a concert film of Broken Social Scene, the Toronto band with the massive membership roster that includes Leslie Feist, Kevin Drew, and Metric's Emily Haines and James Shaw, amongst many others.

The film begins with Bruno and Caroline waking up together. He's elated because, as he explains, if he's waking up with her this morning, that means he went to bed with her last night. This happiness, however, is bittersweet because Caroline is only in town for one more day and then will be going off to Paris, so Bruno needs to make the most of what little time he has left with her. Knowing that she's a big Broken Social Scene fan, Bruno tells her he has backstage passes to their concert (a lie, but his buddy has a plan to work around that). Things are going great for a while but, unfortunately, before the concert is over Bruno finds that his ideas about the relationship and hers are very much in conflict.

Written by Don McKellar (McDonald and Drew get "based on an idea by" credits), the film has a nice sense of flow and manages to convey a lot about Bruno and Caroline's relationship in a very succinct way. The direction that they're heading in is pretty effectively foreshadowed in the opening minutes when Bruno is floating so high on cloud nine that he can't really recognize all the subtle ways that Caroline is already starting to hold him at arm's length. He's investing a lot more into this than she is and when he's finally confronted with that fact it leads to a lot of anger and hurt and frustration on both sides. The way that the relationship is set up and unfolds actually reminded me quite a bit of (500) Days of Summer in that both are about guys who want someone so badly that they're blind to the signs that their feelings aren't quite reciprocated or, at least, not to the degree that they'd like.

McDonald has made a number of films that center on musicians so it should come as no surprise that This Movie Is Broken is quite adept at merging the romantic storyline with the concert footage. Interestingly, rather than using the music to punctuate the romantic storyline, the romantic storyline is constructed in such a way that it underscores the music. The scenes between Bruno and Caroline are used to accentuate the mood and theme of any given song and this turns out to be a very clever narrative strategy because, of course, a song can tell a story in a very short amount of time and thus we get a fair bit of progression and insight into the relationship in a fairly brief amount of time just through the music.

Your enjoyment of This Movie Is Broken will likely depend on your familiarity with and enjoyment of Broken Social Scene. Personally, I'm not terrifically familiar with the band itself, but I am a fan of many of its individual members, so I enjoyed this movie quite a bit. The story around the music is solid and, as I said at the top, big surprise at the end. Check it out.

Nicely done! I think I dug this one a little bit more than you did...possibly because it sparked a newfound admiration for the band in question.

Here's what I thought ; http://mcneilmatinee.blogspot.com/2010/06/lovers-spit-this-movie-is-broken-plays.html

I think I might have liked it more if I'd seen it in the theater because I think the performances would have played better/had higher energy on the big screen.

Seeing in Sydney next month, I can not wait. Hopefully this film will be broadcast from here, I liked Pontypool!