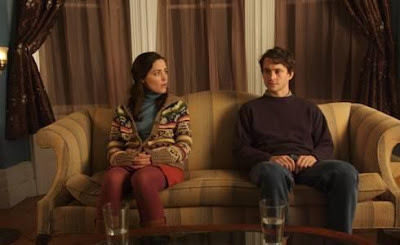 Hollywood doesn't really have the best track record when it comes to dealing with characters who function differently from others. Robert Downey Jr. probably explained it best in Tropic Thunder. Generally, filmmakers plunge these characters too deeply into sentimentality and turn them into a kind of "noble savage" figure whose simplicity is supposed to show the rest of us how modern times have caused us to lose our connection to what's really important. Max Mayer's Adam doesn't totally break free of that kind of sentimentality, but it comes about as close as any movie I've ever seen.

Adam (Hugh Dancy) is a man living with Asperger's Syndrome, his life unfolding according to a set routine. This routine is interrupted by the death of his father, the loss of his job, and the discovery that he may have to sell his apartment now that his father is gone. Any one of these things would be stressful for anyone to deal with, but it's especially so for Adam who relies on the comfort of familiar things because he doesn't handle change or emotion well. Into his life comes Beth (Rose Byrne), a new neighbor with whom he starts a relationship.

Beth, just coming off a break up, approaches Adam almost as a project. She helps him practice for job interviews and tries to coach him in social interactions and tries to be patient with him about all the little things he does differently. Her mother (Amy Irving) is basically supportive of the relationship, though her father (Peter Gallagher) is not and believes that Beth is sacrificing too much in order to be with Adam. Her father, however, has problems of his own and is on trial, facing a prison sentence for some, let's say, "creative accounting" he did for a client and his relationship with Beth becomes increasingly fraught, driving her even deeper into her relationship with Adam who, for whatever difficulties he presents, is at least very direct and honest about where he's at and what he wants.

Adam is a decent film but far from perfect and the screenplay (by Mayer) is probably the film's weakest point. It takes a lot of shortcuts, presenting Point A and Point B but not really exploring the journey from one to the other. Further, the subplot involving Beth's father's trial is a distraction and at times threatens to overtake the primary story. Less time on that and more time on developing the relationship between Adam and Beth and exploring the nuances of it would have been time well spent.

That being said, what the film does well, it does very well indeed. Mayer is very good at characterizing the isolation of Adam's existence, expressing the way that there is an implicit wall between him and the rest of the world. His struggle to connect with others is moving and Dancy's performance is very strong. There are several "showy" moments for him throughout the film but the performance also has a great deal of subtlety to it that really grounds the story and lends it a feeling of authenticity. Byrne turns in a good performance and she and Dancy have a nice rapport on screen but, like I said, the film would be better if it was more about their characters and a little less about the problems in her family.

I like this film. The film has its quirks, smiles, shouts, laughter and tears, but the final product of Adam is certainly something to admire. I am very glad I saw this movie. I recommend this movie for everyone. It is a film processing. It changed me.