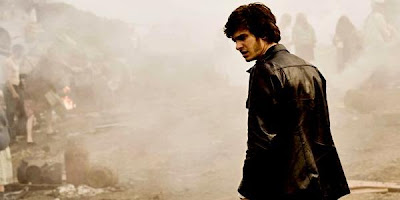 Dang, I was hoping to review all three parts of Red Riding at once, but the other two entries are always checked out at the video store so I guess I'll have to wait to get to them. It is perhaps just as well since 1974 is such an unrelentingly dark film that taking a break before getting to the next one is probably a good idea.

The plot of 1974 is a bit complicated but I'll summarize it as best I can. The story centers on Eddie Dunford (Andrew Garfield), a young Yorkshire reporter who comes to believe that the murders of a series of young girls may be the work of one person. Through the course of his investigation he becomes involved with Paula (Rebecca Garland), the mother of one of the murdered girls, and discovers that corruption runs deep through the local police - so deep that they may have arranged the suspicious death of Eddie's friend Barry (Anthony Flanagan) and may have something similar planned for Eddie if he doesn't back off.

The police are in the pocket of John Dawson (Sean Bean), a local businessman involved in a shady development deal. Not only is Dawson behind the razing of a Roma camp that was occupying the area where he plans to build a mall, but the body of one of the murdered girls turns up on his land. Dawson was also once involved with Paula, who tries to warn Eddie about how powerful he is but, by the time Eddie really begins to appreciate the extent of the danger that he's in, it's far too late. When he storms a party at Dawson's house he's taken into custody by police, who beat and torture him and reveal that in the North, "we do what we want."

Working from a screenplay adapted by Tony Grisoni, director Julian Jarrold crafts a very dark and very heavy film that weighs on you afterwards. At a certain point you come to the terrible realization that there isn't going to be a deus ex machina, that evil will win and good will be snuffed out. It took a couple of days for me to really shake this movie, that's how effective it is. The plot is complicated and it can take a while to really get the various threads sorted out in your head (I would imagine that things become clearer after viewing the other two films) but it's such a well-made film that it's worth the effort.

Garfield's performance plays a large part in creating the sense of resonance that 1974 enjoys. The actor, who is having a very good year with Never Let Me Go and The Social Network, not to mention landing the lead in the Spiderman reboot, first caught my attention with his marvelous performance in Boy A. He brings a great mix of intensity and vulnerability to his role here that makes the impact of his character's journey all the greater. It's wrenching to watch what he goes through during the course of this film, especially when he reaches the point where there is nothing for him but despair and hopelessness. This is a tough film but well worth a look both for the incredibly sinister atmosphere created by Jarrold and for the performances - Garfield's in particular but also those of Bean and Hall.

I guess I was in the mood for compromise and nihilism 1974 failed to deliver. Not a bad film, far, but fails to realize its potential.