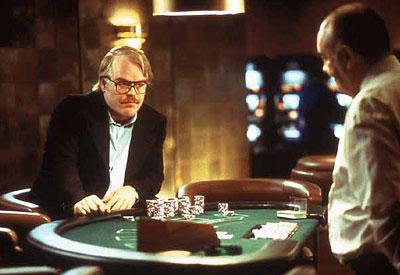 Mahowny is a purist. He's not in it for drugs or women or booze. He might not even be in it for the money. Rather, he's all about the thrill of gambling, the higher the stakes, the better. Richard Kwietniowski's Owning Mahowny is a careful study in how a life is built around and then destroyed by this kind of thrill seeking.

Philip Seymour Hoffman stars as Dan Mahowny, a Toronto bank manager with a gambling problem. Time and again he's told that he has a gambling problem and time and again he corrects someone, insisting that what he has is a "financial problem." He's in so deep that even his bookie (Maury Chaykin) thinks it would be better if he were to abstain for a while, but of course you can't reason with an addict. For Mahowny, placing bets is as necessary to his survival as oxygen.

Thanks to his job, he has access to a lot of money and he uses that access to carry on with his habit, setting up dummy accounts which he can use to bankroll himself. By the time he's caught he's defrauded the bank of just over $10 million and, in the process, won huge sums of money in Atlantic City and Las Vegas and then lost it all through his inability to walk away. He's a figure of some fascination to the men running the casinos, particularly Victor Foss (John Hurt), who adopts Mahowny as a special project and seems almost saddened when Mahowny blows it all. Losing the money, however, isn't the worst of it and soon afterwards he's under arrest and called to account for what he's done.

Hoffman brings a vulnerability to the role that is absolutely essential to the film's success. Mahowny isn't a bad guy - he's short-sighted and selfish, but he isn't malicious and he isn't trying to do anyone any harm. He's quite simply blinded by this compulsion to place bets and keep placing them until he has nothing left to bet. Mahowny is based on real-life Toronto banker Brian Molony, who served 6 years in prison for fraud in the 1980s and claimed that from the age of twelve right up to his arrest, he had never gone more than 72 hours without placing a bet. For him as for his fictionalized counterpart, gambling isn't about joy, it's about need.

For the most part, Owning Mahowny really worked for me. Kwietniowski does a great job dramatizing Mahowny's situation in the quiet terms that define the character. Foss gives Mahowny the chance to indulge in other vices - sending a hooker up to his room, for example - but Mahowny declines them all because all he wants to do is be at the tables. Much of the film is just that, Mahowny standing at a table, the chips either piling up around him or disappearing at an alarming rate. Kwietniowski is able to film these scenes in a way that keeps the tension high and gives the story some momentum. Hoffman delivers a great performance and though I'm a little less keen on Minnie Driver's performance as Mahowny's girlfriend, she holds her own in a largely thankless role.

Nice review, this is one of the rare films that has affected my mental state at the time. I stopped there to run some errands, and everything about the city I had a feeling that was going to be made quickly and the concert would be in place.