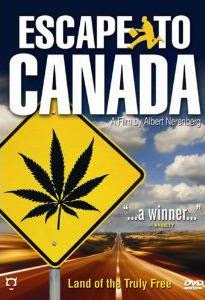 Canada. It's a decadent wonderland. You may not know that, it's a pretty well-kept secret, even to those of us who actually live here. Albert Nerenberg's documentary tackles two contentious issues - gay marriage and the war on drugs - and examines the way Canada's treatment of them differs from that of the US. Lighthearted but veering dangerously into an aggressive us-versus-them mentality a little too often, Escape To Canada is an interesting film to watch today in terms of how much and how little has really changed.

Escape To Canada explores a strange period of legal limbo which occurred during the summer of 2003. In one day in a courthouse in Ontario the right of gays and lesbians to marry was recognized and marijuana was decriminalized - decisions which were cause for celebration for many people and cause for alarm for others. Much of the film is concerned with the reaction to these events from the US and Nerenberg makes the argument that this is evidence that after 9/11, Canada and the US, which had been heading in the same direction, suddenly found themselves on diverging paths. I don't know how true that ultimately is - I don't think the two nations have ever been quite as close socially/culturally as is often assumed, I think the differences were maybe just less pronounced before - but obviously Canada's decision not to participate in the war in Iraq made relations undeniably frosty.

The war on terror is somewhat awkwardly folded into the plot here as Nerenberg attempts to make the case that embracing AWOL American soldiers was part of the "new" and freer Canadian society. This part of his argument is the weakest, for a couple somewhat contradictory reasons. For starters, Canada as a place of refuge for Americans wishing to escape armed conflict is hardly new. Secondly, if anything, the Canadian government's reaction to AWOL soldiers is harsher now than it was during, say the Vietnam War, which means we're going backwards instead of forwards in this respect. The film would have been stronger without mixing in this element, to which it doesn't really even devote that much time, comparatively.

As to the two issues really at hand here, it's interesting to look back at the summer of 2003 from the perspective of 2010. Despite strong feelings of opposition seven years ago, gay marriage is pretty much an accepted fact of life in Canada now. I mean, if the Conservatives under Stephen Harper couldn't manage to reinstate the "traditional" definition of marriage in 2006, I think the Civil Marriage Act is here to stay. Marijuana, however, is still a murky issue. A lot of people, including some politicians, support legalization and the Ontario courts have repeatedly ruled against marijuana laws. The film makes a strong argument for legalization and highlights the major stumbling block in that direction: the Canada-US border. Nerenberg closely examines how the US war on drugs has dictated policy on the north side of the border despite more liberal attitudes within the general population that actually, you know, lives in Canada. This is an issue that isn't likely to be resolved anytime soon and probably not until there's a major shift in US policy towards drugs.

Escape To Canada is an ambitious film and it makes a lot of interesting points but coming in at only 80 minutes and splitting its focus between two issues leaves it feeling just a bit light. It doesn't really have enough time to fully explore either issue and it isn't really able to tie them together as one theme in a way that's really satisfactory. It is, however, a very entertaining film and at times, incredibly moving. Also, it reminded me how much I miss that lunatic Jean Chretien. Come back Jean!

I wish I had been an excellent documentary. And it would have been if the terms had not been so close. Emphasis was placed on gay marriage and legalisation of marijuana and Canada is much more than that.