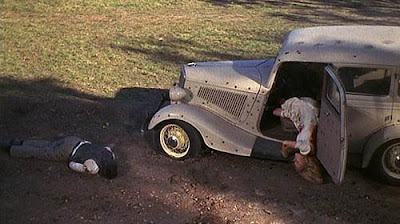 Year: 1967
Director: Arthur Penn
Great Because...: It really goes for it. I mean, it would be difficult to end it any other way but given the reluctance modern films seem to have to actually showing their protagonists die, credit to Arthur Penn for having the duo go out in a blaze of bloody glory.

So, Bonnie and Clyde were a couple of crazy kids who were young, in love, and killed people. They also robbed banks and were amongst the most wanted criminals of their time, putting them in the company of John Dillinger, Baby Face Nelson and Pretty Boy Floyd (all of whom, like Bonnie and Clyde, were killed through the course of 1934). Along with Clyde's brother, Buck, Buck's wife Blanche, and C.W. Moss the pair made their way across the South committing crimes and having run-ins with the law. Buck is the first to fall, killed during a shoot out which Bonnie, Clyde and C.W. narrowly escape. The three make their way to C.W.'s father's farm, where Bonnie and Clyde recover from their injuries, but the law is swiftly closing in on them.

Despite his outward friendliness to them, C.W.'s father is none too pleased to be harboring the outlaws. When the opportunity arises, he makes a deal with Texas Ranger Hamer, who has a personal vendetta against the gang, to help trap Bonnie and Clyde in exchange for leniency for C.W.

In a scene of perfectly crafted tension, director Arthur Penn shows us Bonnie and Clyde, relaxed and happy, enjoying a drive back from town. This is the first moment of true contentment they've had for quite a while and since we know, but they do not, that they're driving into their deaths, the whole thing is tinged with an incredible sense of bittersweetness. Knowing that they'll be driving by, C.W.'s father pretends to be having car trouble at the side of the road. Clyde stops the car and gets out to help, at which point C.W.'s father scurries off and the shooting starts. In the second before the bullets start to fly Bonnie and Clyde lock eyes, suggesting that they've made peace with this particular ending and are at least content that they'll die together, and then a moment later it's all over as they're mercilessly riddled with bullets.

The ending is obviously spectacularly brutal but that's perfectly in keeping with the film as a whole, which never shies away from graphic and intense violence. Bonnie and Clyde go out as spectacularly as they lived and though we're perhaps sad because we've had time to grown fond of them - not to mention the sense of moral discomfort which arises from two unarmed people, even if they are wanted criminals, being ruthlessly gunned down - it would still be disappointing if the film ended any other way. Bonnie and Clyde are legends and their deaths are legendary. The film more than lives up to their legend.

This in an excellent film about the gangster era of the Depression more ironic is that he seems dedicated to the two murderers in real life, who do not deserve such an honour to have a cinematic legacy created in their names.

Ugh! I still need to see this. It's one of my biggest shames.