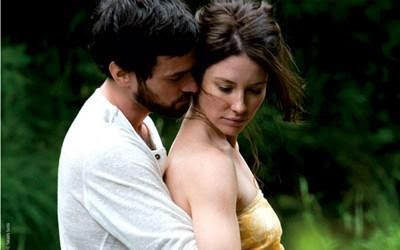 No one can alter the hour appointed for death. This sentiment is often repeated in Afterwards, though the existence of its protagonist seems to contradict that. Constructed like a thriller but lacking in bite, this rather shapeless drama barely seems interested in its own story.

The film begins with a brief prologue involving two children who will of course grow up to be the protagonist and his love interest. When the girl is injured the boy runs for help and in the process is hit by a car. No one understands how it is that he has lived, but he does and we meet him again later, now as an adult played by Roman Duris. He is Nathan, a high powered New York lawyer, now divorced from Claire (Evangeline Lilly), his relationship with their daughter limited largely to phone calls that he often has to cut short. Into his life comes the mysterious Dr. Kay (John Malkovich), who seems to know an awful lot about him and claims that he's a "messenger," which means that he can see when someone is about to die. Those people are characterized as having a haze of white light all around them which only Dr. Kay can see.

Nathan doesn't believe him at first but Dr. Kay is persistent. He brings Nathan back in contact with Anna (Pascale Bussieres, who apparently has a portrait in her attic as she appears not to have aged a day since When Night Is Falling), an old friend whom Dr. Kay claims will soon die. Despite his skepticism, Nathan makes it his business to watch out for Anna and try to prevent her from dying. After he saves her from being electocuted he believes that he's disproved Dr. Kay's assertions about not being able to prevent death, but then she dies later in an equally horrific way, forcing Nathan to concede that Dr. Kay is right and that he has no time left to waste if he wants to put his house in order before his own death.

There is a tragedy in the past that drove Nathan and Claire apart, something which Nathan has never fully dealt with and about which he must finally confront in order to be at peace. Once he's done this, the film throws a twist at both him and the audience which is foreshadowed in one of Nathan's conversations with Dr. Kay and in that opening prologue.

From a story perspective, Afterwards has all the ingredients needed to make for an interesting film, but unfortunately everything ends up seeming so watered down. Part of the problem is with Duris, who seems to be entirely lacking in screen presence and sleepwalking through the film - though, in fairness, that may be due to the fact that this is his first English speaking role. Still, when he's teamed up in scenes with Malkovich the result is dialogue so soft-spoken that you can't help but wonder, "Why is everyone whispering?" As for Malkovich, he renders a serviceable but surprisingly uncharismatic performance. Of course, the root of the problem in this regard may be the kind of aimless way the film is directed, which sucks all the energy out of the story and the characters.

The one really good thing about the film is the absolutely beautiful cinematography by Pin Bing Lee. The flashback scenes to Nathan and Claire in happier times, and scenes of Claire in the desert waiting to photograph a cactus as it blooms, stand out as being particularly sumptuous. I don't know that those shots are nececessarily worth sitting through the whole movie for, but the memory of them certainly takes some of the sting away after it's all over.

Wow, I have never seen Evangeline Lilly in anything other then Lost. Do you think she is gonna go "make it" in movies?

Seems like it would be the thing to do. Apparently she played Jeremy Renner's wife in The Hurt Locker - I had no idea!

I watched the ending today and was baffled because I Did not know the movie title or anything (it was on TV as a preview - but I completely agree with this blog - it was beautiful to watch but they were whispering and lacked energy on screen.) Perhaps too slow paced, and yes draining to watch because of the constant moepyness of it!