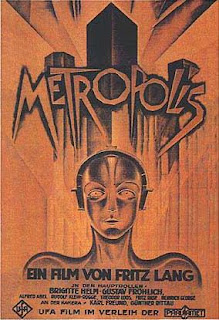 #5: Metropolis
Creepy, a little sinister and perfectly capturing the overall feeling of Fritz Lang's masterpiece. There are many different versions of the Metropolis poster, but this one is my absolute favourite. 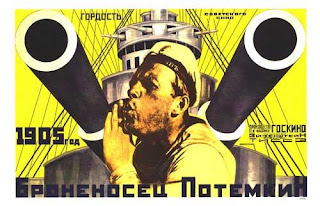 #4: Battleship Potemkin
I particularly love the way that the canons are pointing directly at the viewer. Sergei Eisenstein's film can't really be accused of subtlety (subtlety would in fact undercut its point) and neither can the poster with its "with us or against us" attitude. 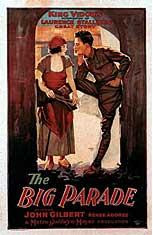 #3: The Big Parade
Where to begin? I love the way that the poster captures the dynamic between the protagonist and his love interest. The way he's blocking her path with his leg suggests the sense of entitlement he has as a rich American, but the look on his face also makes it clear that he's in love with her. It's also perfect that he's sort of half-in and half-out the door since the two will soon be separated by WWI. 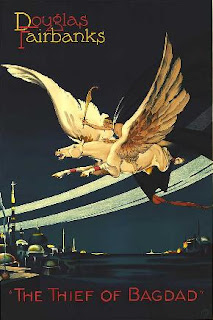 #2: The Thief of Bagdad
The artwork for this poster is really gorgeous, so it's a great poster simply from an "oooh, pretty" standpoint. It also handily evokes the sense of fun and adventure inherent in the story. 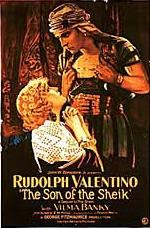 #1: Son of the Shiek
Back in the day, Rudolph Valentino was the guy and this poster for his biggest hit captures the raw, slightly dangerous, sexuality he possessed which drove women nuts. Yes, it's kind of problematic racially and from a feminst stand point, but it's from 1926. What wasn't racist and sexist back then?

Hey, I used to have that Metropolis poster in my room! Quite eye-catching.

PS I did that Kreativ Blogger Award thing that's been going around, and one goes to you. Just so you know! Here it is.

I do love the Metropolis poster. Its really special (as is the movie...)