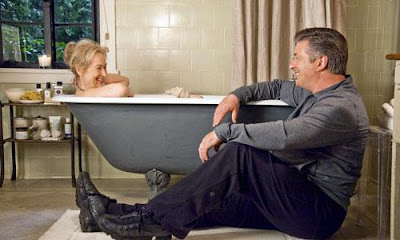 I went into It's Complicated knowing that it wasn't going to be "great cinema." I knew this because I'm familiar with some of Nancy Meyers' previous work and because the trailers made it pretty clear that it wasn't really aspiring to be "great," as such. I went to it anyway, though, because it looked harmless enough and it fits neatly into a category of films I liked to call "movies I can see with my mom." Tarantino and Scorsese? No. Fluffy romcoms and ornate period pieces? Yes. While the story is as predictable as I thought it would be, I enjoyed this one a lot more than I was expecting to.

So here's the deal: Jane (Meryl Streep) and Jake (Alec Baldwin) have been divorced for ten years. They have three grown children, one of whom is about to graduate from college, and Jake is remarried to Agnes (Lake Bell), a much younger woman with a precocious five-year old son. In New York for the graduation, Jane and Jake have a little too much to drink and sleep together. It's a revelation for him, the best thing that's happened to him in years, but her take on it is much different. For one thing, she's now in the position of being "the other woman," which sort of turns her world on its head, and she's also in the very uncomfortable position of leaving herself open to having her heart broken once more by Jake.

Back in California, she and Jake continue their affair but she also starts taking tentative steps towards a relationship with Adam (Steve Martin), the architect working on the addition to her house. Adam and Jake are polar opposites and it's clear to anyone with a lick of common sense that Adam is the guy she should go for but, of course, the heart is rarely so sensible. To make things even more complicated, Jane and Jake's future son-in-law, Harley (John Krasinski) has discovered their affair and takes great pains to help keep it hidden.

The lion's share of the story is devoted to Jane's affair with Jake which, while it provides a great deal of the comedy in the film (Baldwin is seriously on fire in this role), also kind of holds the film back. When Jane and Adam share scenes and discuss the pain of their respective divorces, the difficulty of moving on, and the shock at finding that you're still capable of finding that you like someone, you realize what this movie could have been. It could have been about adults behaving and talking like adults, about two people still smarting from the pain and disappointment of their divorces taking a second chance with each other. It could have had depth, it could have been a contender, but it settles for being a lighthearted, Sunday afternoon diversion kind of film. As films like that go, this one's pretty good, but you can't help but wonder what it might have achieved if penned by a better writer.

I have kind of a love-hate relationship with Meyers in that for everything about her films that I like, there's something that I dislike just as much. For example, I like that she makes films in which the protagonists are older women who are still seen as sexually viable (Streep here, Diane Keaton in Something's Gotta Give), but I dislike that she always seems to go for the easiest possible joke and that often it's at the expense of the same protagonist that the film claims to be celebrating (in fairness, I found this considerably more glaring in Something's Gotta Give than I do here). I also dislike that the films are marketed as being about ordinary women with ordinary problems when in fact those women are living lives that are economically unrelatable to most people. I don't want to get into a big rant about that though, so moving on...

Although the story doesn't run particularly deep, Streep does manage to wring a few moments of poignancy out of her role. When the last of her children moves out of the house at the beginning of the film, or when she walks through her house turning out the lights after being stood up by Jake, you can sense her loneliness and her need to simply be acknowledged by someone in her life, which makes it all the more insane when she declines a date with dependable, thoughtful Adam so that she can have a clandestine meeting with Jake. On the other hand, you can sort of understand why she does this since Baldwin is at the top of his game as Jake and Martin isn't really given enough to do as Adam to make him anything more than "the nice guy." Honestly, the movie is so completely for Jake that I'm kind of surprised that his last scene wasn't where it ended (and slightly disappointed since the shot of him and Jane sitting together on a bench would have made for an excellent callback to the final scene of The Graduate, which Jake and Jane watch with their kids earlier in the film).

For all its flaws, It's Complicated is the kind of film you can enjoy if you go into it in the right spirit. It isn't high art but it definitely has its moments and now that we're entering the January dumping ground for new releases, it's a pretty good choice at the multiplex.

I actually ended up seeing this with my girlfriend and we both enjoyed it a lot. Loved that whole scene where they smoke a joint!

Steve Martin was playing it cool on this one, but it was great seeing him.

Meryl Streep is awesome as always, so cool, so classy, so relaxed.

Alec Baldwin has been developing into quite the comedian.