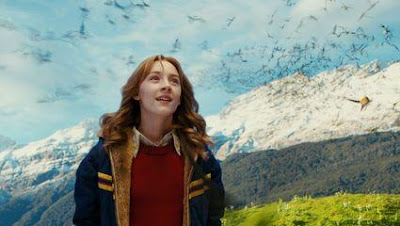 With the crash and burn that was one-time hopeful Amelia's release now a distant memory, it seems that The Lovely Bones has officially usurped the title of Awards Season Punching Bag. There has to be one every year. Is it deserving of the amount of vitriol it seems to have inspired? No, but in a sense I can understand where all that is coming from because it's such a mixed bag of a film. Parts of it are absolutely glorious and others just don't work at all - I can't remember the last time I left a film feeling so divided about it.

The Lovely Bones tells the story of Susie Salmon (Saorise Ronan), who at 14 is raped and murdered. The film works its way up to that event, first taking time to establish the relationships that will be severed and damaged by her loss. Although there are some underlying tensions in her family - her parents (Mark Wahlberg and Rachel Weisz) love each other but have grown apart, and Susie is in the midst of that particularly dramatic stage of adolescence defined largely by awkwardness and unprovoked hostility (I remember it well) - it's a close knit group and, in a general way, happy.

One evening Susie walks home alone and is lured into a trap by Mr. Harvey (Stanley Tucci), one of her neighbors, and never seen again. Her father becomes obsessed with tracking down various leads, some of which he's invented; her mother deals with it by not dealing with it at all; her grandmother (Susan Sarandon) tries to breathe life back into the household; and her sister Lindsay (Rose McIver) becomes increasingly suspicious about Mr. Harvey's behavior. Meanwhile, from a place in between heaven and earth, Susie watches over them and in some instances tries to guide them towards the truth about her murder.

I should preface this by saying that I've never read The Lovely Bones, but from what I understand it's more an exploration of how the Salmon family deals with their grief rather than a thriller about bringing a killer to justice, which is what the film version is more than anything else. In certain respects it works as a thriller - the scene in which Lindsay breaks into Harvey's house is particularly taut and effective - but, at the same time, it shifts the story's focus, taking it away from the victim and giving it to the killer. I think that that's the primary reason why the scenes in the in-between place fail to resonate as deeply as they should. Of course, there's also the fact that the afterlife is made to look like a glossy, candy colored, CGI explosion, but I think that this visual aesthetic could have worked if the story was constructed differently. One of my favourite scenes actually takes place in that CGI paradise as Susie watches a series of ships in bottles (like the ones she used to make with her father) crash against each other and the rocks of the shore. However, as beautifully realized as the imagery in the scene is, it's ultimately not very meaningful because by reducing Susie to a glorified secondary character, the film leaves itself with nothing to anchor the story.

The film is at its strongest in the build up to Susie's death, as it focuses on the dynamics of the Salmon family. When it moves away from this and, essentially, splits into two narratives - Susie is heaven, the family and her killer on earth - it ceases to be cohesive and instead becomes a series of set pieces. Some of these pieces do work, but others fail and the lack of any real grounding in the story results in something that's kind of soulless - ironic, given the premise.

In the end, I think that The Lovely Bones is a noble failure. The performances are strong (Tucci seems to be getting the most notice but I thought Wahlberg was really great as well) and the film itself is occassionally brilliant, but Jackson's vision of this story is too muddled. Too often it feels false and hollow - Susie's version of heaven might be accurate to her, but Jackson certainly didn't make me believe in it - and just doesn't connect with the audience.

Now I gotta see it. I havent read the book, but Peter Jackson's involvement pulls me in. I like it when Jackson takes a stab at something a bit more serious...last time he did it, it was with Heavenly Creatures and that turned out really well.

Im very curious to see this, even though reviews have been luke warm.

I had such high hopes for this one ... now I will walk into the theater expecting disappointment. Damn you, Peter Jackson!

@Film Connoisseur: Parts of it are excellent/exactly what you would expect from Jackson; it just doesn't hold together very well as a whole.

@M. Carter: I had high hopes, too. The first half hour or so of the movie lived up to those hopes, but then it kind of fell apart.