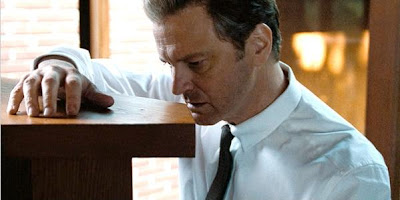 A Single Man is perhaps the most elegant film to come out of 2009. Beautifully photographed (I honestly can't emphasize that enough) and sensitively told, it follows a day in the life of George Falconer (Colin Firth), an English professor mourning the loss of his partner of 16 years as the rest of the world panics over the Cuban Missile Crisis. With the help of solid performances from Colin Firth and Julianne Moore, Tom Ford's directorial debut demonstrates a lot of promise.

George's goal is simple: just make it to the end of the day. Eight months ago he lost Jim (Matthew Goode) in a car accident and now his life is reduced to a series of empty rituals. It is his intention to make this his final day on earth and he spends it tying up loose ends by emptying out his safe deposit box, cleaning out his office, and spending one final evening with his friend Charley (Julianne Moore), a boozy divorcée who, like him, is a British transplant. He writes notes to the people he'll be leaving behind, he lays out the suit he wishes to be buried in, and he tries to find the best way to stage the scene to leave behind the least amount of mess, resulting in a darkly funny scene with a sleeping bag.

Throughout the day George is haunted by memories of Jim, both good and bad. The worst comes in the form of a scene in which George finds out, over the phone, that Jim has been killed and that he's not welcome at the funeral. "It's for family only," Jim's cousin explains after revealing that Jim's parents didn't even want to inform George of the loss. The undercurrent of this conversation will be revisited later in a conversation with Charley who, despite her affection for George and her knowledge of how much Jim meant to him, tacitly states that the relationship wasn't "real." The film is never heavy handed in the way that it deals with the repulsive unfairness of society's treatment of gays and lesbians, which makes the story all the more effective. More devastating than Jim's family's treatment of George is George's quiet acceptance of it and, similarly, Charley's statement is all the more cutting because she actually knew George and Jim as a couple and knows how deeply George was and continues to be affected by the loss, but still acts as if it was some passing phase, a minor interruption on his way to resuming a "normal" life, perhaps with her. This isn't just a matter of him not being accepted; it's that they don't take him seriously as a thinking, feeling human being because of his sexuality.

Visually, A Single Man is stunning - it should come as no surprise that Ford has an eye for composing beautiful shots. Sometimes, perhaps, the film over-emphasizes the visual aspect and starts to drift dangerously towards seeming more like a perfume ad than a film, but it still never looks less than exquisite. My favourite visual trope here is the way a scene will begin with kind of a washed out look and then flush suddenly with color at a key moment. I really hope that the Oscars recognize Eduard Grau's work as cinematographer come nomination day because he demonstrates a great deal of versatility in just this one film.

Come Oscar nomination day I also hope (and at this point fully expect) to see Firth's beautiful, subtle performance recognized. It is, by necessity, a performance of great restraint. George is hiding in plain sight, putting on a mask so that he can meet the world without encountering harassment or violence in return. Consider the way that Ford shows George putting on his suit in the morning, piece by piece as if he's putting on armour and preparing for battle. What we're seeing is George preparing to play the role of "George." Firth's performance - in addition to Moore's, which is also quite good - gives the film that extra push to make it more than an exercise in putting together a series of pretty shots. Truth be told, as much as I liked A Single Man and as confident as Ford's direction is, he ultimately isn't really skilled enough as a director to get very deep below the surface of the story (and the story itself is sometimes a bit lacking - the ending, especially, left me cold) and a lot of heavy lifting is left to the actors. Still, it's a strong effort and a truly gorgeous piece of work.