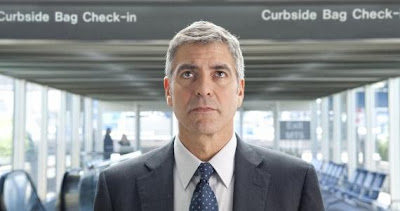 (See what I did there? Because Up In The Air is about a guy who avoids close relationships and spends most of his life in airports, so it has a double meaning. Yeah, I’m pretty clever. But enough about me...)

Our hero in this adventure is Ryan Bingham (George Clooney), a genial guy who flies around the United States firing people for a living. To most people that might sound like a depressing (perhaps even somewhat evil) occupation, but Ryan loves what he does because it allows him the freedom to exist without strings, to never be in one place long enough to become encumbered by the obligations of a genuine relationship, be it romantic or otherwise. In the current economic climate business is booming but that doesn’t mean that the company has stopped trying to find ways to trim the fat and it looks as if Ryan and the other field agents are about to become casualties of technology, destined for desk jobs in which they perform their duties over the computer. The person behind this plan of action is Natalie (Anna Kendrick), a college grad with all the answers and none of the experience. In an effort to preserve his way of life, Ryan challenges her to get some experience in the field before overhauling the business and the two set out on the road together.

The other woman in Ryan’s life is Alex (Vera Farmiga), with whom he has a casual relationship that is dependent on overlaps in their hectic, cross-country schedules. While Natalie is a young idealist who believes that she can make her life unfold according to her schedule, Alex is a little more cynical, a lot more like Ryan. “Think of me as you with a vagina,” she tells him at one point, much to his delight. Ryan and Alex have a lot of fun together, but their lifestyles ensure that they can never be more than just ships passing in the night – until, of course, it becomes more than that, though not necessarily for both.

The screenplay by Jason Reitman (who also directs) and Sheldon Turner is sharp and funny, particularly in the scenes between Ryan and Natalie. While Ryan readily takes Natalie under his wing so that he may impart the wisdom of his ways to her, she’s reluctant to take him seriously and she subtly picks away at his personal ideology of travelling light. Watching Clooney and Kendrick play off of each other is a delight, particularly the way that she tends to cut their conversations off at the knees, rendering him speechless but giving him the opportunity to make faces of bemused exasperation. Clooney’s rapport with Farmiga is also excellent and their first scene together crackles with a relaxed sexiness. Ryan and Alex get each other and theirs is very much a relationship of equals, which is refreshing. The way that their relationship resolves itself is a bit weak, but the strength of everything leading up to that makes it easy to forgive.

Clooney’s performance in this film has been called the best of his career and I think that’s a fairly accurate assessment. Ryan could easily be a stereotypical man-child, running from commitment at every turn, always moving in order to avoid having to acknowledge the void inside him; but Clooney takes this as a starting point and then actually builds on it to create a full-bodied character. There’s a scene where Ryan tries to soften the blow of a firing by telling a man that rather than disappointing his children by losing his job, he can gain their admiration by pursuing his original passion as a chef, stating that the reason children admire athletes is because they follow their dreams. Later Ryan returns to his hometown with Alex and shows her photos of his days as a high school basketball star - I don’t think that’s a coincidence. There’s a lot of subtlety in the way that he wistfully confronts his past and it becomes clear that one of the reasons he can do what he does is because he sees himself in the people he’s firing. He’s doing for them what he can’t do for himself by freeing them from the corporate drudgery that may bring in money but won’t bring fulfilment – though that probably wouldn’t be much comfort to someone whose been at the same job for decades and doesn’t know how they’ll pay their mortgage.

I liked Up In The Air a lot, but I don’t really get the massive critical fuss over it. With its focus on the current economic crisis and use of real people who have lost their jobs in the firing scenes it wants very much to be relevant and meaningful, but it doesn’t run quite as deep as it’s playing at. At one point Ryan explains that in his business you sell one thing and do another and that’s kind of what the movie is doing, too. It’s a slick bit of business, selling the audience on the idea that it’s about the little people, the common man struggling to stay above water, but really it’s just using these people as props for its far more ordinary plotline about a lost man finding his way. It’s still a very good movie, but it is performing a narrative sleight of hand.

I agree that Clooney has done his best work ever here. He was born for this part, but as I said in my review, he had to do some living and maturing before he was ready for it. He has fantastic chemistry with Vera Farmiga (one of my favorite actresses), and that storyline takes such an unexpected and wrenching turn that it left me speechless.

Thanks. I'm a big fan of Forster's so I was glad to have an excuse to use that quote.

I thought that some parts of the film were excellent, whilst other elements were fairly standard. It was edited by Dana Glauberman (who also worked on Juno, another film with a very polished feel) and she does an outstanding job here. My favourite scene being the one in which Clooney is packing a suitcase, something his character has clearly done many times before! It was a super-slick and sexy slice of cinema. Hope Dana gets recognised for this!

Really enjoying your writing style by the way, must bookmark this page....:)

A well-acted piece about a man's inability to cope with a world more real than the one he lives. And the screenplay just keeps on getting better and better. Nice review, check out mine when you can!