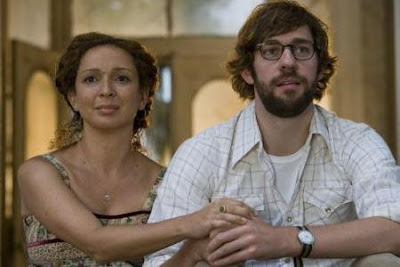 I avoided Away We Go when it was in theaters because I kept hearing words like "smug," "self-absorbed," and "hipster" associated with it. I wish I'd given it a chance anyway because I liked it a lot even though I agree with some of the criticisms about it and its characters. I guess basically what I appreciated about this one is that it's about two smart people who genuinely seem to love and respect each other and it isn't until you actually see that in one film that you realize how seldom you see it in others.

Meet Burt (John Krasinski) and Verona (Maya Rudolph), a long-term couple in their early 30s still living like they did when they were in college ("We have a cardboard window," she points out to him in one scene as evidence that they aren't quite on track in terms of this whole grown up thing). When they find out that they're going to have a baby and that his parents (played all too briefly by Catherine O'Hara and Jeff Daniels) - whom they were counting on to lend a hand once the baby is born - are moving to Europe, they decide to pack up too and set out on an odyssey to find the best place to raise their child.

During the course of their journey, Burt and Verona spend time with family, friends and acquaintances who run the gamut from realistic to caricature. The caricatures are Verona's old boss Lily (Allison Janney), who thinks that she's a fun drunk and might one day be set straight by her less than amused family, and Burt's old friend Ellen (Maggie Gyllenhaal), who now goes by LN and is generally a humorless and judgmental ultra-liberal. Too much time is spent with these characters and not enough with the ones that feel most authentic, such as Verona's sister Grace (Carmen Ejogo) and Burt's brother (Paul Schneider), which is perhaps the film's most glaring problem. Burt and Verona do seem a bit smug in their dealings with Lily and LN but, admit it, if you were in a room with either of them wouldn't you feel smug too?

Away We Go is a departure for director Sam Mendes and everything seems much more relaxed here than in his other films. I'm sure that after making something as tightly-wound and serious as Revolutionary Road making something relatively light like Away We Go probably seemed like a nice break. I think that he handles the material well, moving the story at a good pace and not letting Burt and Verona get too navel-gazey, but as I said before too much time is allotted to the wrong supporting characters. Those characters may be funny, but the broad strokes used to draw them keep the film from attaining the depth it obviously desires and occassionally attains in other scenes.

As the leads, Krasinski and Rudolph are both excellent. Known for their comedic roles (Krasinksi on The Office, Rudolph on Saturday Night Live), the two handle the serious stuff very well and the final few scenes between their characters are so expertly rendered that you feel inclined to forgive the film its flaws and unanswered questions (such as, how is that two people who can't replace their cardboard window with glass have enough money to do all this travelling?). They play off each other easily and, even though this film didn't exactly set the box office on fire, I hope they get the chance to work together again in the future.

Although there are aspects to Away We Go that I think are a bit weak, the good ultimately far outweighs the bad here. As I said before, the way that the relationship between the leads is characterized by love and support is refreshing in light of how romantic relationships in most movies these days are portrayed. As a slight aside to wrap things up, I would like to state now for the record that I totally want to see a sequel in which he follow Burt's parents to Europe. Catherine O'Hara and Jeff Daniels - how could it go wrong?

This is the same criticism I had for the film when I saw it. Where do they get all this movie for traveling, paying for hotel rooms, renting cars and all that...arent they supposed to be like super poor?

But one lets go of that, cause the film is very light and sweet, mainly because the two main characters are so nice to each other, lots of respect and love on screen.

Also, why didnt they just go that house that they had available to live in from the very beginning? It would have saved them a whole lot in travel expenses! :)

I agree that too much time was spent on the wrong supporting characters. Usually I love Maggie Gyllenhaal and Allison Janney but not so much here. Paul Schneider was fantastic as always

@Film Connoisseur: That's exactly what I thought at the end! I mean, obviously there wouldn't have been a movie if they'd immediately decided on that, but it seems like neither of them even thought about living in that house before.

@filmgeek: Paul Schneider is quickly becoming one of my favourite actors. Even in small parts he manages to make the most of it and turn in a memorable performance.

Ditto. He's my favourite actor of the decade