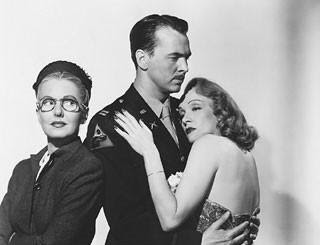 A Foreign Affair is one of my favourite Billy Wilder films, but it's surprisingly hard to get hold of. Thank God it shows up on TCM every once in a while. A romantic comedy, a post-war drama, occassionally a musical - this one's got it all. If you're a Wilder fan or a Dietrich fan, this is definitely a film you'll want to seek out if you haven't seen it already.

The story takes place in post-war Berlin and concerns a love triangle between a visiting Congresswoman, a U.S. Army Captain, and a former Nazi mistress. The Congresswoman is Phoebe Frost (Jean Arthur), who is prim and proper and determined to take people to task for the activities that tend to be the offshoots of reconstruction after war, such as black market bartering and relationships between foreign servicemen and local women that are founded on a kind of tacit prostitution. She's scandalized at every turn by what she sees around her and by the efforts of the people in charge to gloss over it rather than deal with it. Since her time in Berlin is limited she can't clean up the entire American zone, but she becomes determined to set at least one thing right by bringing Erika von Schluetow (Marlene Dietrich) to justice.

Erika is a singer in one of the underground clubs and is rumored to have been the mistress of at least one high ranking Nazi official. Thus far she has managed to elude the process of de-Nazification and a mandatory stretch in a work camp thanks largely to John Pringle (John Lund), a US Army Captain who offers her protection and provides her with some small luxuries in exchange for her favours. He does what he can to hinder Phoebe's progress in bringing Erika down and, in the process, falls in love with her. She falls in love with him, too, and starts to loosen up a little but even after Erika does Phoebe a favour by keeping US authorities from finding out that she was arrested as part of a raid in one of those clubs, Phoebe is determined to do what she sees as the right thing.

The screenplay by Charles Brackett and Richard Breen is sharp, mixing in a lot of humor while also staying on point. The story is not presented as black and white and acknowledges that in times of war, certain codes of morality tend to be suspended. Phoebe is presented as "good," but she's also presented as being a bit naive and a little too rigidly moralistic. Erika, while not "good," exactly, isn't presented as a villain either. In one of my favourite movie speeches ever, she explains her position to Phoebe:

We've all become animals with exactly one instinct left. Self-preservation. Now take me, Miss Frost. Bombed out a dozen times, everything caved in and pulled out from under me. My country, my possessions, my beliefs... yet somehow I kept going. Months and months in air raid shelters, crammed in with five thousand other people. I kept going. What do you think it was like to be a woman in this town when the Russians first swept in? I kept going.

She's a survivor. The things that she has done to survive - both while the Nazis were in power and after the Allied victory - haven't always been pretty, but she's still there, still going forward. As for John, he's done things that are questionable but, as he points out to Phoebe, it's not so easy to pull the breaks after spending years going full speed ahead to attain victory. You can't just flip a switch and go back to playing by ordinary rules. Wilder and the writers give these characters complexities that aren't always afforded to characters in romantic comedies, allowing them to seem less like "types" and more like "people."

As far as the actors go, they deliver exactly what you would expect of them. Arthur is good as the stick in the mud who slowly learns the let loose, and her facial expressions and body language whenever Phoebe is supposed to be shocked and appalled by something are excellent. She has fair chemistry with Lund, who has that roguish charm down pat. The show is stolen, of course, by Dietrich who manages to look glamorous even while brushing her teeth in a crumbling apartment. This is one of my favourite Dietrich performances and Wilder plays to all of her strengths here, allowing her to shine like a diamond in the rough. The film itself, though fairly light in spirit, nevertheless hits on certain truths about the hardships of postwar reconstruction that give it depth. People like Erika, Phoebe and John exist in places torn apart by war (though in reality they likely don't end up as happy) and some of the arial footage that opens the film is actual documentary footage of bombed out Berlin at the close of the war, giving the film a dose of realism to balance out the elements of pure movie escapism. I honestly can't recommend it more.