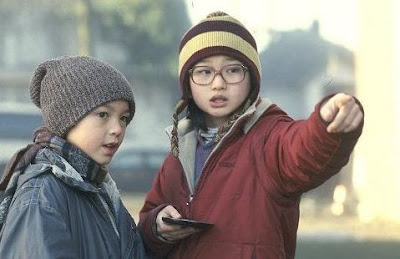 Long Life, Happiness and Prosperity is one of those films that you've seen before, in one form or another. Its story - which involves a single mother, her precocious child and that child's plan to alleviate her mother's loneliness by finding her a romantic partner - is not particularly original, so it's fortunate that the film is charming enough that you're willing to overlook this fact. With the help of some nicely rendered performances, Mina Shum's romantic comedy/drama is definitely worth a look.

The precocious child in question is 12-year-old Mindy Ho (Valerie Tian). Aware that her mother (Sandra Oh) is having financial difficulties and worried about her lack of a social life, Mindy decides to kill two birds with one stone by finding her mother a husband. To go about this, Mindy makes use of some Taoist magic that, quite naturally, goes horribly awry, affecting the lives of other people rather than her mother. As a result of Mindy's machinations, a butcher wins the lottery and a security guard loses his job - on the surface one event seems like a positive, the other a negative, but both have essentially the same effect in that they force both men to look inward at aspects of their lives that they would rather not have to acknowledge. Though the magical aspect is necessary to the film's premise, it seems much more interested in looking at how people react to events and how those reactions are textured and informed by other things such as family relationships, religion, etc., than in magic itself. Magic here is used simply as a point of entry for character study.

Mindy's experiments with magic also create romantic complications. She wants to make a love connection between her mother and her co-worker Alvin (Russel Yuen), but her spells get all mixed up, resulting in infatuation in the wrong people and creating a lot of confusion and hilarity. A lot of what happens in the story you can predict from a mile away, but it's handled so well that that hardly seems to matter as you're watching it. There's nothing wrong with being a genre film if the effort and care is put in to making the product as excellent an example of that genre as this one ends up being.

Though the story is spread out amongst several characters whose storylines ultimately converge, it rests for the most part on young Tian's shoulders. Kids in movies geared towards adults tend to walk a fine line - an inch this way or that could push a child from "adorable" to "annoying" - and Tian has a good handle on her character. She has an easy, believable chemistry with Oh, who is at something of a disadvantage in that she's the story's straight man, the grounded force around which chaos swirls. It's easy, at first glance, to overlook her performance but after it's all over, hers is the one that you really remember.

Shum keeps the film moving at a nice pace and takes the time to truly develop her characters. The story itself is fairly light fare, but the attention she pays to the smaller details, to the nuances of the various relationships at play, give it a degree of depth. Though there are several darker, more dramatic moments in the film, it's ultimately very funny and overall quite delightful.