Canadian Film Review: The Decline of the American Empire (1986) 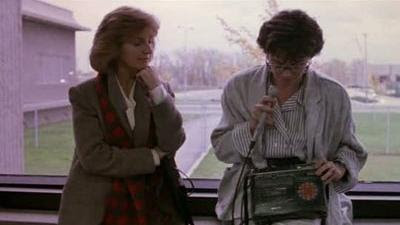 The characters in Denys Arcand's The Decline of the American Empire spend a lot of time talking. This should come as no surprise to anyone who has seen an Arcand film, particularly The Barbarian Invasions, which is a sequel to this one. For the characters in this film - all of whom are university professors or the romantic partners of university professors - the best thing about doing something is being able to talk about it afterwards. Fortunately, they're all good talkers.

The film begins with a group of men gathered at a house by a lake and a group of women at a spa. Both groups talk relentlessly about sex and you get the sense that what each individual has done/experienced is far less important than their ability to verbally one-up everyone else as they extol witticisms and bons mots at every turn. The men are Remy (Remy Girard), Pierre (Pierre Curzi), Claude (Yves Jacques) and Allain (Daniel Briere). The women are Louise (Dorothee Barryman), Dominique (Dominique Michel), Diane (Louise Portal), and Danielle (Genevieve Rioux). When the two groups finally come together at the lake house, they look almost like two rival gangs about to face off. However, as the story takes its turns, we realize that alliances have been formed less according to gender and more according to intellectual status.

Louise is Remy's wife. Unlike the other members of the group she is not an "intellectual," per say, and there is a certain degree to which it seems like everyone else is humoring her. The way that they react to her is ultimately not that different from the way they react to Diane's brutish lover Mario (Gabriel Arcand), which is to say with polite indifference. Things come to a head when Louise offers an opinion on an interview that Dominique has done with Diane and Dominique casually reveals that she's slept with Remy. Later Dominique confesses to Allain that she wanted to hurt Louise, though she can't really justify why. Louise, though likeable and firmly enconsed in the group thanks to her long marriage to Remy, is still something of an intruder, an honorary but not a real member of the club.

The heart of the film is, I think, in the scenes between Remy and Louise after she realizes that she's been deluding herself. In the earliest scenes Remy happily recounts stories of his affairs to the guys, while Louise naively discusses her marriage with Dominique and Diane - both of whom have had affairs with Remy. It is telling that in the moment when Remy absolutely should speak - Louise, in fact, begs him to - he finds that he cannot. He would rather do anything than talk at that moment because this is not the kind of talking he likes to do. The characters, for the most part, seem to have intellectualized sex to a point where the act itself is isolated in time and space and unconnected to the relationships and people around them. To be confronted with someone like Louise, who believes that things matter and have consequences, is something that Remy just can't handle.

It would be easy to write The Decline of the American Empire off as a Big Chill style movie, but it manages to be more than just the tropes that it uses as its jumping off points. The characters are distinct and interesting and their conversations are entertaining. The script is tight, revealing the characters' personalities and the nuances of their relationships with each other in small doses that allow the story to bloom before us. I think that The Barbarian Invasions is the better of the two films, but both offer rich character studies that are only deepened when viewed together.