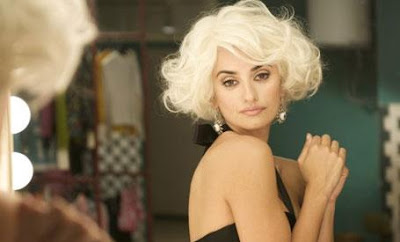 All artists are influenced by those who came before them. Some fold these influences deep into their art while others happily celebrate it at the surface. Pedro Almodovar is of the latter school as is exuberantly and abundantly apparent in his latest film Broken Embraces. Beautiful looking and wonderfully crafted, the film is like a love letter not just to the directors whose work Almodovar admires, but to his frequent collaborator Penelope Cruz as well. With Broken Embraces taking its place alongside Talk To Her, Bad Education and Volver, Almodovar brings to a close a decade a filmmaking that any director would admire.

Like many of Almodovar’s films, this one jumps back and forth in time. The story is recounted to us by Harry Caine (Lluis Homar), a writer who, before losing his sight, was a film director by the name of Mateo Blanco. After an unsettling encounter with a man named Ray X (Ruben Ochandiano), who wants to hire Harry to write a screenplay for him, Harry tells his friend Diego (Tamar Novas) about the last time he and Ray X met. In flashbacks we meet Harry when he was still Mateo, preparing to direct a film called “Girls and Suitcases” (loosely based on Almodovar’s own Women on the Verge of a Nervous Breakdown). The film is to be a departure for him, a comedy after a series of dramas, and one day Lena (Penelope Cruz) shows up at his office hoping to audition for the lead role. The audition doesn’t go well, but Mateo is drawn to Lena and gives her the part. For years she has been the mistress of Ernesto Martel (Jose Luis Gomez), who agrees to finance the film as a means of keeping tabs on Lena and ensuring that she won’t leave him. As part of his plan he dispatches his son, Ernesto Jr. (who will later become Ray X) to be his eyes on the set, ostensibly as the maker of a making-of documentary on the film.

Inevitably Mateo and Lena fall in love. Every night Ernesto watches the footage his son has shot on set, hiring a lip reader to tell him what Mateo and Lena are saying when they’re out of range. These scenes, which expose the intensity of Ernesto’s obsession with Lena, also reveal to us how thoroughly he sees her as an object rather than a person. When she walks in on him watching the latest “secret” footage of her and recites in person what she’s saying to the camera, he would rather watch her onscreen than turn around and watch her live and in the flesh. What is happening onscreen represents his worst fears but it also represents something that he can control – he can pause it, rewind it, erase it and, most important of all, it stays where it is. The images onscreen are mirages that he can make disappear at will – or so he would like to believe.

Almodovar makes allusions to several other films in this one including Belle de Jour (an alias that Lena uses is Severine, the name of the main character in Bunuel’s film) and Peeping Tom, a film about a man who videotapes his murder victims. The man with the camera in this case is Ernesto Jr., but rather than killing people as he films them, he ends up saving someone while filming them. Almodovar also borrows from Vertigo in several ways, most obviously in a shot of Mateo running down a flight of stairs and also in the naming of Lena, short for Madelena (the object of obsession in Hitchcock’s film is named Madeleine). Thematically it also has a lot in common with the earlier film in that both are about one character trying to make another into what he wants them to be. The architect in this scenario is Ernesto Sr., but Lena is not the only Madeleine figure, though she is the most obvious. He plays a similar game with his son, who is gay but finds himself enacting a pattern of compulsory heterosexuality set out by his father which leaves him miserable and full of hate for the older man. Mateo, too, is a Madeleine figure in that Ernesto Sr.’s actions serve to rob him of his identity, necessitating the permanent creation of Harry Caine as a personality rather than just an alias.

Broken Embraces marks the fourth feature film collaboration between Almodovar and Cruz and though it doesn’t quite reach the heights of Volver (which admittedly set the bar very high) it’s still one of the best films in either of their filmographies. Almodovar’s adoration of Cruz is always apparent – I don’t think she’s ever more lovingly photographed than in his films – and her best performances are the ones guided by his direction. Here he gives her a character whose identity is always shifting and she excels, cycling through Lena’s personas with ease and giving us multiple variations on a single character. Her sensuous, subtle performance is the perfect centrepiece for the story, making it easy to understand why the men in her life are so totally consumed with her. The performance is the jewel in the crown that is the film.