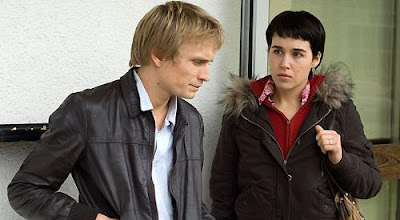 Having now seen L'Enfant and Lorna's Silence, I've come to the conclusion that I really need to seek out the rest of the Dardenne brothers' work because their films are rewarding and intriguing in ways that few others can match. Filming in a simple, direct style, they put their protagonists in unusual, morally questionable situations, and then just stand back and watch as they deal with the consequences. It's a simple strategy, but it works very well.

The story follows Lorna (Arta Dobroshi), an Algerian woman involved in a complicated scheme for money. She has been brought to Belgium by Fabio (Fabrizio Rongione) and married to drug addicted Claudy (Jeremie Renier, star of L’Enfant), through whom she will gain citizenship. Once her papers come in, the plan is to kill Claudy and make it look like an overdose and then Lorna will marry a Russian in order that he can get citizenship. Before she gets paid, all of these steps must be completed and she soldiers forth determinedly, making plans with her boyfriend Sokol (Alban Ukaj), a truck driver who is out of town more often than not but with whom she plans to open a small restaurant once she gets the money.

Her dealings with Claudy are marked by a barely concealed irritation on her side and an intense neediness on his. He’s trying to kick drugs and is perhaps in love with her despite her apparent lack of interest in him. At any rate, focusing on her seems to give him motivation for getting clean and the sincerity of his efforts prompts Lorna to try to change track. Rather than letting Claudy be killed, she puts a plan in motion to get a quick divorce from him on the grounds of abuse (evidence of which is self-inflicted because she can’t convince Claudy to hit her) and asks Fabio to convince the Russian to wait just a little while longer, a request that results in a series of heartbreaks and complications for her.

The heart of the film is the scenes between Lorna and Claudy, which are so sad in so many ways. He wants so desperately for her to care about him, even in a platonic way, and she is so detached and unwilling to let him bring her into the process of his recovery. Part of the reason for her detachment is, of course, that she knows Fabio is going to kill him so developing an emotional connection with him would make things more difficult for her; but there’s also the sense that even if it weren’t for this larger scheme, she’d still prefer to distance herself and not have the drama. Claudy is characterized rather like a child, always in need of attention and plenty of it. Lorna is perhaps colder to him than she needs to be, but her unwillingness to play his games is understandable – making her responsible for his recovery wouldn’t benefit either of them. Still, it's hard not to feel for Claudy when he sadly asks her to play a game of cards with him, sit up with him a while, anything so long as she's not leaving him alone. The desperation he feels will be mirrored later in Lorna, who wants to make amends in the face of opposition from all sides, including Claudy's family in a brief but quietly devastating scene.

It’s a bit difficult to get a handle on Dobroshi’s performance because so much of it is about holding back. She's a character more defined by her passivity (ie her silence) than she is by the active steps she takes to change the situation, and she spends much of the film behind a mask that allows her to live side-by-side with Claudy while knowing that he will be killed and that she'll profit from it. When the mask finally drops in a moment of guilt and terror, Lorna becomes almost a different character. Because Dobroshi must act so coldly for most of the film, her performance at first seems less affecting than that of Renier, though her ability to move Lorna from being fully detached from Claudy to being fully invested in him demonstrates the skill of her performance. It is not a flashy role, but she makes a lot out of it.

The film ends on a somewhat ambiguous note. We don't know what will ultimately become of Lorna, though we're in a position to hazard a few educated guesses about what her fate will be. All we know for certain is that the silence that would have helped her establish a life for herself has instead become the cause of her undoing. The open-ended feel is not unlike the ending of L'Enfant, which I liked a bit more than this one. Lorna's Silence is a really good movie, but it doesn't quite reach the greatness of that previous film.

Hi Norma. This is a great review, and you've got plenty to look forward to in catching up with the Dardennes' earlier work. I think The Son is their masterpiece, and one of the decade's greatest films, but all of their pictures are superb in different ways, and they all deal with profound and complex themes. I think they are incredible filmmakers.

I was fortunate enough to interview both the Dardennes and Arta Dobroshi in 2008, and having seen the film you may find the interviews interesting.

Thanks, I'll be sure to check those out!