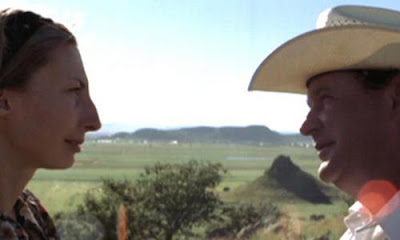 From its first moments – an exquisite shot of the dawn pushing through the night – Carlos Reygadas’ Silent Light announces itself as a masterpiece and never for a moment falters during its nearly two and a half hour running time. This engrossing and meditative drama set in a Mennonite community is told in a simple way and is all the more effective for it. It is an uncommonly beautiful film both in form and in content.

Unfolding slowly and using non-professional actors from actual Mennonite communities, Reygadas tells a story of romantic complications, religious and moral obligation, and forgiveness. The story proper begins with Johan (Cornelio Wall), his wife Esther (novelist Miriam Toews, whose great novel A Complicated Kindness is also set in a Mennonite community and explores some of the same themes), and their six children sitting around their kitchen table. When Esther and the children depart, Johan breaks down under the weight of his internal conflict, weeping at the table and looking so lonely that it could break your heart. In the next scene he confesses to a friend that he’s fallen in love with another woman, a feeling inspired not by lust (though he does feel that) but by the inescapable knowledge that she’s his soul mate.

The woman is Marianne (Maria Pankratz) and Esther is aware of the relationship, having been informed by Johan. He has been trying to keep away from Marianne but is continuously drawn back to her, even going to bed with her while two of his children wait downstairs so that he can take them to the dentist. He knows that he is doing wrong but is not strong enough to give her up, and it’s to the film’s credit that we believe that this is about more than just sex, but about a deep spiritual connection that can’t be broken. He loves Marianne, but he will never leave Esther – indeed, the thought of such a thing seems entirely foreign to him. He knows, however, that things cannot continue to go on this way and that something has to give.

One of the more interesting aspects of this story is that even though it is set in a religious community, it isn’t judgmental or preachy, and neither are its characters. When Johan confides to his father (Peter Wall, his father in real life) about the situation, the older man grows pensive and then tells a story about a similar predicament that he faced when he was younger. He gently reminds his son of his obligations as a husband and father and reassures him that in time the intensity of his feelings for Marianne will fade and he will find happiness once again in his marriage, but he also celebrates the fact that Johan and Marianne have found each other because the bond they have is rare. The father ends by telling his son that he wouldn’t want to trade places with him but that he also envies him – to feel the way that Johan and Marianne feel for each other is wonderful, even if the circumstances also make it painful.

The actors are so completely at ease in their roles that at times the film starts to feel like a documentary and you almost want to look away because you feel like an intruder. There is a particularly powerful scene in which Esther - who until this scene is shown to us exclusively through Johan's eyes - privately breaks down, giving in to her hurt and anger. It is not unlike the first scene involving Johan, though of course her tears have a different character than his, and these scenes speak to how emotions are dealt with in the community. When people talk they speak calmly, almost flatly, to each other; but alone, they give in and release a torrent of emotion. The film does not judge the community for this - it is not a treatise against the dangers of repressed emotions - rather, it is simply remarking on the fact.

There is such an intense realism to this story that the ending may seem shocking because, at first glance, it doesn't seem to fit with everything that has come before. A miracle seems to take place, though I've also heard a theory that what happens is actually an elaborate trick meant to force Johan's hand - either way, though it may seem jarring at first, on reflection it's a strangely beautiful way to end the film. If you have a chance to see Silent Light don't hesitate, it's an absolutely terrific movie.