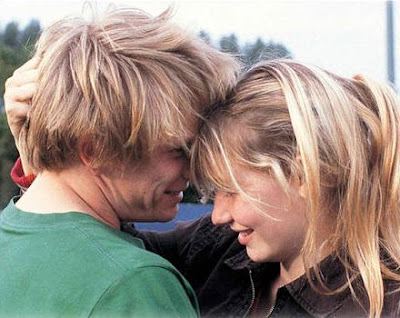 “What did I do?” asks Bruno (Jeremie Renier), the protagonist of L’Enfant. It’s a question so ridiculous that I actually laughed out loud at it, and yet it’s so fitting that it would be asked by this particular character that it seems to elevate the film to a whole other level. Written and directed by Jean-Pierre and Luc Dardenne, the film presents Bruno as being so arrested in his development that he cannot see the connection between an action and its consequences, and so his question is not facetious but completely sincere. It's at about this point that your creeping suspicion is confirmed and you know that the title doesn't refer to the baby, but the baby's father.

Sonia (Deborah Francois) has just given birth to a baby boy and returns to her apartment to discover that in her absence Bruno, her boyfriend, has sublet it to friends. She goes looking for him and finds him acting as the lookout for a robbery in progress and begging for change from motorists stopped at a light. She presents the baby to him and asks where they’re supposed to sleep now that he’s rented out their home. He tells her that the sublet will only be for another two days and that in the interim they’ll stay at a shelter, although they won’t be able to stay together since men and women are segregated. This isn’t a good start, but Sonia doesn’t seem to notice, perhaps because she’s so used to Bruno’s schemes. He has no job and makes his money stealing, spending it all immediately because he reasons that he’ll always be able to get his hands on more.

While Sonia and the baby sleep at the shelter Bruno sneaks out to meet his fence, who asks after Sonia and the baby. She wonders if they’re planning to raise him themselves and informs Bruno that people pay a lot of money in black market adoptions. The next day, when Bruno agrees to watch the baby while Sonia runs errands, he decides to find out how much money he could get for the baby and agrees to sell him. He returns to Sonia with an empty stroller and a pocket full of cash. “This is ours!” he exclaims and when she reacts with horror to what he’s done, tells her that they can always have another baby. She faints and has to be taken to the hospital, where she calls the police. Now not only does Bruno have to get the baby back and return the money to the buyers, but he also has to come up with more money to pay the go-betweens for wasting their time.

Bruno is not a good man, but there is a sense in which he is an innocent. He is so detached from any kind of morality, any real human feeling, that he genuinely does not seem to recognize the difference between right and wrong. When he tries to get Sonia to take him back, reasoning that he sold the baby but she called the cops so that makes them even, we see that he has a child’s understanding of fairness – as in, I hit you, you hit me. He doesn’t recognize the value of things and lives completely in the moment, acting only on impulse. His gang consists of two kids who appear to be about 13 and to possess more maturity than Bruno with regards to the spoils of their exploits. Money runs through Bruno’s hands like water and he ends up having to bargain with the kids when he spends some of theirs, agreeing to get their share to them the following week plus extra for being late. Bruno isn’t a guy who should be left in charge of anything.

The camera follows Bruno with curiosity, rather than judgment. It doesn’t invest itself in the baby any more than Bruno does – the baby, in fact, hardly seems to be a presence at all in the film. He doesn’t cry, he hardly moves, he is just an object held at various times by Bruno and Sonia. Bruno is the child that the film is interested in and it stands back and watches him as things spiral out of control around him and he can only stand there, confused as to how he ended up in such a position. Renier plays Bruno as a blank, a man who lives solely in the present and has neither the desire nor the drive to think beyond the very second in which he's living. The character is not complex, but the performance itself is profound.

L'Enfant is directed in a simple, straight forward way that makes it all the more effective and compelling. By the time it reached the end, I was spellbound and immediately watched it a second time. This is one of those rare films that stands in a class all its own and can't be easily compared to any other film. It is a stark, minimalist masterpiece.

Agh! I've owned this movie for a few years now (I bought it because it won the Palm D'Or), but still have yet to watch it! You're review has convinced me to finally do it. Thanks!

Waste no more time! It's a great movie - I hope you like it as much as I did.