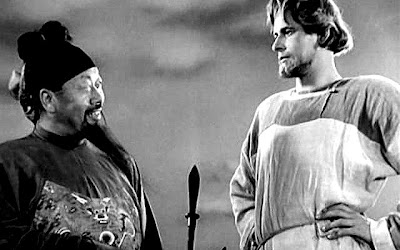 Alexander Nevsky is an epic historical film from Russian master Sergei Eisenstein. Made in 1938 at a time when tensions between the Soviet Union and Germany were high, the film has heavy political overtones and suffered the misfortune of being completed only a few months before the Molotov-Ribbentrop Pact was signed, making the Soviets and Germans allies and necessitating that the film be pulled from screens. Fortunately for the film (and the world, I suppose), the Soviets and the Germans would be fighting again by 1941, giving the film a second life and making it seem disarmingly prescient.

The film takes place in the 13th century as Teutonic Knights attempt an invasion of Novgorod. Prince Alexander (Nikolai Cherkasov) is sent for to lead the troops because he’s well known for his bravery and intelligence and for his ability to rally the people. The knights have already taken the city of Pskov and brutally massacred its population (including a scene in which the knights casually drop children into a fire), which adds fuel to Nevsky’s cause. He devises a plan to lure the knights into a fight on the ice, reasoning that their heavy armor will eventually lead them to catastrophe.

Running parallel to Nevsky’s story is a subplot involving two soldiers, Vasili Buslai and Gavrilo Oleksich, two friends who have used the war as the pretence for a wager. Whichever shows the most courage and skill during the Battle on the Ice will win the right to marry Olga Danilovna, a Novgorod maiden they’ve both taken a liking to. She doesn’t seem to care, particularly, which of them she ends up with – I’m not sure whether that says more about her or them, but in the end the loser declares that he’ll settle for Vasilisa, a Pskov woman who joins in the fighting at Novgorod and has nothing at all to say when her hand is claimed in marriage. It’s a fairly silly plot, especially when contrasted with the rest of this very serious film.

The film is, unsurprisingly given the time and place it was made, an explicit propaganda piece. Eisenstein often films Alexander from below and frames him so that he’s busting out of the shot – the film simply cannot contain this great man as he stands in his Superman pose. The German knights are portrayed as decidedly vile creatures whose helmets are meant to evoke those of German soldiers. The helmets are a fairly dehumanizing element of their costume, as they obscure the entire face and leave only little slits for the eyes, making the German forces seem monolithic and almost robotic. The message of the film is loud and clear – invade the Soviet Union at your own peril – and very overt regarding who it’s really about, leaving no question as to why it had to be pulled from distribution.

Eisenstein doesn’t get terrifically experimental with this film – it’s pretty straight forward narratively, though there is a lot of visual symbolism. It can be a difficult story to engage with at times because the characters are so thin, but I can see how it would have worked as a rallying piece at the time it was made and especially at the time of its re-release in 1941. The Battle on the Ice is the film’s big set piece and is one of the best and most memorable large scale hand-to-hand combat sequences I’ve ever seen. The story can be a bit plodding as it wades through layers of political commentary, but this battle sequence makes the film worth watching.