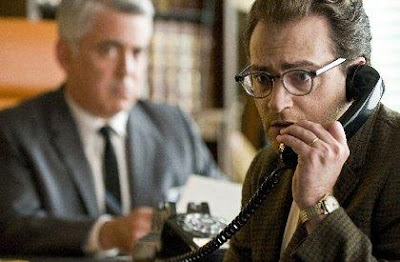 Around the time that Burn After Reading came out, I read a commentary that stated that all the Coen brothers’ films were variations on the heist movie. Not having seen all of the Coens’ films, I don’t know whether that thesis holds together completely, but it certainly seems true enough of the films that I have seen. In Fargo, No Country For Old Men, and O Brother Where Art Thou?, it’s money that’s been stolen; in Raising Arizona it’s a baby; in Burn After Reading, it’s a disc; in The Big Lebowski it’s a very special rug. In A Serious Man, the purloined object (good fortune) is much more elusive, and so is its thief.

The story takes place in the 1960s, somewhere in the Minnesota suburbs. Larry Gopnik (Michael Stuhlbarg) is a physics professor with a wife and two children whose entire life is about to come crashing down around him. His wife is in love with another man, “a serious man” named Sy Ableman (Fred Melamed) who hugs Larry and wants him to know that they’re going to get through this. Larry moves out of the house and into the Jolly Roger motel with his brother Arthur (Richard Kind), who spends most of his time draining fluid from a boil on the back of his neck. His children don’t seem to care that he’s gone – all that matters to his daughter is that Arthur is now out of the house which means the bathroom will no longer be monopolized and she can wash her hair; all that matters to his son is that the TV reception is off and F Troop is fuzzy. A Korean student is trying to blackmail him for a passing grade. His neighbors seem to be trying to expand their property into his. A representative of the Columbia Record Club is dogging him over a membership he never signed on for. The Rabbi lauded for his wisdom won’t see him. Every time Larry thinks that things can’t get worse, they do.

Larry is not a bad man and when he says that he "didn't do anything," it's true. His greatest crime, it appears, is passivity. So how to explain his recent misfortunes? The film begins with a prologue in which a Polish couple is visited by a man that the wife swears is a dybbuk. She declares that they’ve been cursed and perhaps that’s what has happened to Larry. Maybe Arthur – whose arrival in the Gopnik household seems to have portended the end – is the dybbuk, or maybe Larry and Arthur are descendants of that couple and the curse has been extended down to them. Then again, perhaps the explanation is that sometimes shit just happens. You're just going along, thinking you've got it together, having averted what you thought would be your greatest crisis and then bam! Tornado.

A Serious Man is the most lowkey of all then Coen brothers films I've seen and feels at times less cinematic than novelistic. It quietly creeps into Larry's life and then sits back to watch it being dismantled, studying him, layer after layer, and then stepping back again. In certain respects, the film feels as passive as Larry himself - there's no great narrative push in one direction or another, which works because it adds to the sense that things are just happening to Larry beyond all control. Stuhlbarg handles all of this well as Larry becomes increasingly baffled by the events in his life then slowly melts into acceptance and starts to come to terms with things. He carries the movie easily and never lets Larry slip into being pathetic or whiny. He's just a good man to whom several bad things are happening all at once. There is a tendency with fictional characters to value them for their quirks, but it's Larry's pure ordinariness that makes him (and Stuhlbarg's performance) special.

I liked this movie a lot, but I didn't love it. Like Burn After Reading last year, I thought it was funny and well crafted but not particularly resonant. Maybe it's because so much of the story hinges on the seeming randomness of the universe, but I found it difficult to engage with this movie in a really meaningful way. Objectively I can see it's particular genius, and I can understand why other people love it, but it ultimately left me a little bit cold.

"the purloined object (good fortune) is much more elusive, and so is its thief.

You have no idea how pissed I am at myself for not thinking of this sooner. Great catch.

Very good review. I have to think that this will go down as one of the best, yet underexposed, movies of the year.

Not one of the Coens best, but still at the same time a very odd, and darkly funny treat. Nice post!