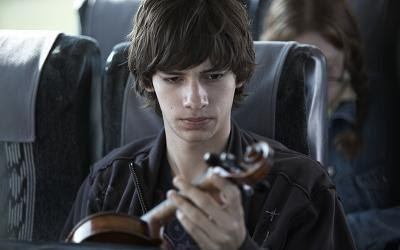 Like much of Atom Egoyan’s work, Adoration is a film that isn’t easily pinned down. It slips in and out of different time frames, it depicts events both real and imagined, it allows its characters and their relationships to remain somewhat elusive. That it works is a testament to his ability to guide the audience through the sometimes complicated plot. This isn’t an easy film and its refusal to really resolve itself might be frustrating to some, but it’s one of Egoyan’s stronger efforts.

The story centers on Simon (Devon Bostick), who was orphaned as a child and raised by his uncle, Tom (Scott Speedman), who takes on the responsibility out of love for his sister and in order to escape from the father who domineers and intimidates him. At school, Simon tells a story about his parents, relating that his father was an attempted terrorist who tried to send his mother, pregnant with him at the time, to Israel with a bomb in her luggage. This story is not true but the result of a writing exercise in the French class taught by Sabine (Arsinee Khanjian). Sabine, who is also the school’s Drama teacher, encourages Simon to continue to work with this story, which was inspired by an actual incident and which, through internet forums, reaches the survivors of that actual incident and sparks a fierce debate in online chat rooms.

Simon gets caught up in the debate, particularly in playing devil’s advocate with regards to his “father”’s actions and the question of whether they were committed out of love or hate. What Simon is really trying to deal with is the murkiness of the facts surrounding the deaths of his parents, Sami (Noam Jenkins) and Rachel (Rachel Blanschard), and the race based tensions within his family. His grandfather insists that Sami killed himself and Rachel on purpose and that him committing an evil act was inevitable due to his origins. Tom is generally silent on the subject, insisting that he didn’t know Sami that well despite the fact that he and Rachel were married for 10 years. Aside from wanting to know for sure what happened to his parents, Simon also wonders what Tom really thinks and, specifically, what prejudices he holds.

Though Simon is the film’s protagonist, it is Sabine who becomes the most fascinating character. She has reasons for encouraging Simon and for helping him to test his uncle that you wouldn’t expect. That she’s able to weave herself so snugly into his life might seem a bit too coincidental but Khanjian (Egoyan’s wife and a frequent figure in his films) is able to sell it and is also able to convey the idea that her intentions were harmless, even if the results have done damage. The way she enters Tom’s life on various occasions is intriguing and the way that the film keeps us guessing about her until the end is very effective. She’s the story’s wild card, seemingly capable of anything and able, it turns out, to turn the whole narrative on its head.

I think that, like many of Egoyan's other films, this one is ultimately questioning the concept and value of truth. The ending of Adoration seems happy but do we - or the characters, for that matter - really know more than we did at the beginning? The ending is rooted in Sabine's ability to provide a missing puzzle piece, but what if that piece is false? What if the information she's providing is as mixture of truth and fiction, just like Simon's story? No one can ever really know what happened to Sami and Rachel except for Sami and Rachel, but now the people who've been left behind have a story that gives them comfort - and maybe that's even better than the "truth."