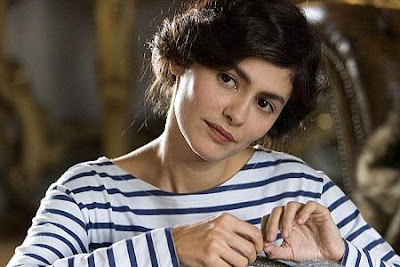 Oh, dear. Once upon a time, a woman named Coco Chanel nudged women’s fashion into the modern era with an aesthetic that emphasized comfort over shape without sacrificing elegance. One has to wonder how Chanel, who freed women from the confines of the corset and the petticoat, would feel about seeing herself placed in such a stodgy and airless biopic.

The film opens with sisters Gabrielle and Adrienne Chanel (played as children by Lisa Cohen and Ines Bassalem) being deposited at an orphanage by their father, whom they never see again. As adults they toil at manual labor by day (Gabrielle as a seamstress now played by Audrey Tautou) and at night they perform a double act in a music hall. Their career is derailed first by Gabrielle’s prickly comments to the hall owner, who unceremoniously fires them, and then by Adrienne’s “engagement” to a baron. Gabrielle is certain that the baron will never make good on his promise but Adrienne is confident in his love for her and leaves to set up house with him in Paris. Shortly thereafter Gabrielle sets off for Paris herself, inviting herself to live with wealthy Etienne Balsan (Benoit Poelvoorde), who nicknames her Coco after one of the songs he saw her and Adrienne perform in the music hall.

Coco’s relationship with Etienne is not a happy one. He agrees to let her stay on at his estate but expects sex in return and asks that she keep herself hidden away when his friends visit, as he’s embarrassed by her lower class origins. Eventually she forces her way into his social circle and he makes the best of it by making her the entertainment, forcing her to reenact her old act for the benefit of his friends, one of whom is Boy Capel (Alessandro Nivola). She and Boy fall in love and though their relationship is complicated by a number of factors, they do find some happiness together and he encourages her to leave Etienne and helps her to start the business which will, eventually, make her world famous.

Coco Before Chanel falls into the same trap that snares a lot of biopics, namely the assumption that the most interesting thing about an interesting person is their sexual partners, which is rarely the case. The film spends a lot of time focusing on Coco’s relationships with Etienne and Boy and, yet, both relationships end up feeling curiously underdeveloped. Her feelings for both men seem to change according to the whims of the plot, rather than according to any organic progression of emotion and intimacy. I believe that in real life Coco’s relationship with Etienne could have evolved from its ugly beginnings into something comfortable and friendly, but I don’t believe it the way that it plays out in the film. Nor do I believe in the half-hearted attempts to introduce conflict into Coco’s relationship with Boy. After discovering that he is to be married to someone whose family wealth can fund his business ventures, she informs him that nothing between them will ever be the same again and yet they seem to carry on afterwards just the same as before, except that now she knows they’ll never marry. Similarly, when she learns that the money she’s made through her shop is under his control because he secured the loan that got her the shop in the first place, she’s upset but things quickly revert to normal between them. Does she see the similarities between her relationships with Boy and Etienne and the way that each has found a means to “keep” her? The film seems only to care enough to suggest these issues, not to actually explore them.

Through it all Tautou delivers a solid, unwavering performance. Coco is a much colder character than she usually plays and Tautou brings a hardness to her that works well with the story. Coco has not had an easy life and has come to expect the world to be unfair and disappointing. Her eventual ambitions in the world of fashion are characterized not by optimism, but simply by grim determination. If only the film itself were so determined. Coco’s relationships with Etienne and Boy are a necessary part of her story, in that one introduced her to her clientele and one provided her with the capital to start her business, but they are not the story. If she didn’t have that very particular, revolutionary style, there never would have been the empire that still bears her name, so why not spend more time exploring how she developed and nurtured that style instead of lumbering through the paces of a love triangle?

Writer/director Anne Fontaine has a keen eye for framing shots (several are stunningly beautiful), but the pacing of this film is absolutely brutal. If it had unfolded at a more lively pace, I might not have minded its preoccupation with Coco’s romantic life so much, but the fact that it feels so damn long even though it’s only 105 minutes really killed it for me. It is not a film without merit, but there’s not nearly enough for me to recommend it.