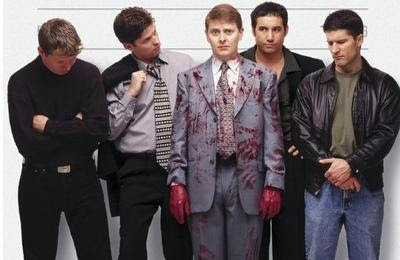 An ordinary man, framed for a crime he didn't commit, on the run in a chase that will culminate at the top of an American monument - but, no, this is not North By Northwest, though in its own, goofy way, The Wrong Guy is also rather brilliant. It's the kind of a movie where a character can posit a totally crazy theory about the JFK assassination - "His head just did that. I call it the 'No Bullet Theory'" - and not only will it not seem out of place, but entirely sensible given everything else that's going on.

Dave Foley stars as Nelson Hibbert, an executive who believes he’s about to receive a big promotion thanks to the fact that he’s engaged to the daughter of his boss. He’s disappointed when he learns that the boss has a favorite daughter and that the promotion will be going to the guy who is engaged to her. In a rage, Nelson storms into his future father-in-law’s office and discovers him with a knife in his back – a knife which Nelson unthinkingly removes and then tries to reinsert when he realizes what he’s done. By this time he’s covered in blood (he’s also been screaming a lot, which gets the attention of other people in the office) and certain that everyone will think he’s the murderer. Pretending to be casual, he makes his way out of the building (again: covered in blood) and goes on the run. Little does he know that there was a security camera in the boss’ office which captured the murderer in the act, a fact which is doubly funny when you take into account the elaborate means the real killer (Colm Feore) employs to get out of the building undetected.

No one is actually looking for Nelson (his co-workers, in fact, are convinced that he’s still at the office and doing a better than usual job – think of it as the George Costanza effect) but he has a way of ending up at the exact same place as the real killer and, shortly thereafter, the cops always show up. The killer becomes convinced that Nelson is actually a cop himself and decides to get rid of him, but his plans are always somehow thwarted. Eventually Nelson winds up in a small town and is taken in by the Holdens – Fred (Joe Flaherty), a banker who is about to be run off his lot by wealthy farmers, and his daughter Lynn (Jennifer Tilly), a narcoleptic who doesn’t let her condition get in the way of her desire to get behind the wheel of a truck.

The film, written by Foley, David Anthony Higgens, and Jay Kogen is a parody of chase movies generally and North By Northwest specifically. It also parodies the convention of the evil banker running simple farm folks out of their livelihood by reversing the trope and having the farmer be the town’s big time tycoon. “Sure be nice to tear this bank down and plant me a fresh crop of corn,” Farmer Brown tells Fred gloatingly. This is all played completely straight and very dry, which is probably why it works so well. That the characters aren’t aware of how ridiculous they’re being in situations that are equally ridiculous, just makes it even funnier.

There’s a subplot involving the police detective (played by Higgens) who is investigating the murder and spearheading the hunt for the killer which finds him trying to shirk his responsibilities at every turn. All he wants to do is pass the case off to someone else so that he doesn’t have to do anything, but the people around him are doing such a good job that all the pieces fall in his favor and the investigation practically runs itself, dragging him along with it. His indifference creates a nice balance to Nelson’s nervous, clumsy energy and the killer’s single-minded determination.

Directed by David Steinberg, the film is a well paced and clever send up of chase movies. It invests itself fully in the surreal nature of its reality and has the confidence to let the film stay "in character" along with the actual characters. If you happen to see this one in the video store, don't hesitate to pick it up. You're in for a treat.

Wow, I love this movie, and it's so rare anyone else has seen it! (it's not available in the US- at least, it wasn't when I bought the DVD a few years ago.) I agree, its success comes from the way its silliness is all played so straight. That, and Dave Foley is amazing.

ps I seem to recall you're a Kids in the Hall fan (sorry if I'm wrong). Did you know about this? I'm certainly excited!

I am definitely a Kids fan; thanks for that link, I'll be looking out for that one.