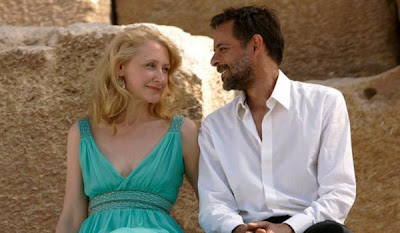 When I first saw the trailer for Cairo Time my impression was of a generic, cut and paste story about a woman finding herself in an exotic land. Anh Khoi Do’s review over at The Cultural Post, however, left me assured that there was more to it than meets the eye, and indeed there is. Ruba Nadda’s film is a meditative, beautifully rendered story that works on a number of levels and acts as a terrific showcase for Patricia Clarkson.

Clarkson stars as Juliette, a Canadian journalist travelling to Cairo to reunite with her husband, Mark, who works for the UN. She’s met at the airport by Tareq (Alexander Siddig), Mark’s former colleague, who explains that Mark has been held up in Gaza and will join her in a few days. Tareq offers to show her around the city, an offer that she’s reluctant to accept until she discovers just how difficult it is for her to walk the streets alone without being harassed. Tareq becomes, in a sense, a key that allows her access to places she might otherwise not have seen and because he puts her so deeply at ease in a setting that previously made her anxious and afraid, the lines between friendship and love quickly begin to blur.

There is always a danger with stories like this of exoticizing the foreign locale and its people and lazily coding the white protagonist as “good” by his or her willingness to embrace the other culture. Cairo Time is able to sidestep this in a couple of ways and in doing so deepens the bond between Juliette and Tareq. The film shows Juliette being drawn to Tareq not because of his “otherness” but because there’s something about his personality that is familiar to her and that she naturally gravitates towards. It’s the same thing that draws her to Kathryn (Elena Anaya), another embassy wife (though, technically, she’s an embassy girlfriend) and the only person in that particular circle with whom she’s able to form any kind of meaningful connection. She’s comfortable with Kathryn, whom she joins on an “adventure” to the White Desert, and her friendship with Tareq is similar because with both of them Juliette is able to let her guard down, relax, and just take things as they are.

It also helps that the film doesn’t devolve into a lesson in tolerance or a story about a benevolent white person who will fix what she sees as a backwards culture. Juliette and Tareq come from different worlds – the film never shies away from this and in fact confronts it head on. Tareq concedes that things aren’t great, particularly for women, in his country but he’s also rightfully wary of Juliette’s ideas to implement change. She wants to write an article about street children for her magazine – a fashion magazine in which such an article would be supremely out of place. At best such an article would momentarily tug at a few heartstrings; at worst it would exploit the plight of the children in a forum devoted to frivolous consumerism. It wouldn’t actually change anything. Tareq admires Juliette’s heart and her desire to help, but as he points out to her time and again in subtle and more overt ways, you can’t solve a problem that you don’t fully understand and you don’t gain that understanding just by walking the streets and meeting a few people. There is a whole sociopolitical context that must be grasped and given the effects of globalization, you have to be willing to accept and confront the fact that some of things you do (particularly in terms of what you buy) at home affect the lives and possibilities open to someone a world away.

Both Clarkson and Siddig render quiet, sensitive performances that leave much of their characters’ relationship unspoken. The film is about so much more than whether Juliette and Tareq will have an affair and in its complex, layered exploration of this relationship, the film is quite moving. As a director Nadda is graceful and unintrusive, giving the characters plenty of room to breathe and letting the story move at its own pace. It isn't a perfect film, but it's a beautiful one that deserves to be seen.

Thanks for the mention and I'm glad to see you liked the film.

I could take the fact that the film didn't depict Juliette as the "good white" willing to embrace a non-Western culture. After all, as the film subtly points it out, Tareq - if I remember very well - love someone, but couldn't go live with her because that person happens to be a Christian Egyptian and also because of Egypt's social tradition.

"Both Clarkson and Siddig render quiet, sensitive performances that leave much of their characters’ relationship unspoken. The film is about so much more than whether Juliette and Tareq will have an affair and in its complex, layered exploration of this relationship, the film is quite moving. As a director Nadda is graceful and unintrusive, giving the characters plenty of room to breathe and letting the story move at its own pace. It isn't a perfect film, but it's a beautiful one that deserves to be seen."

I couldn't agree more with that.

That's very true regarding the relationships between Christians and Muslims. I think the film is more effective for the fact that it's brought up in casual conversation and not dwelled upon.