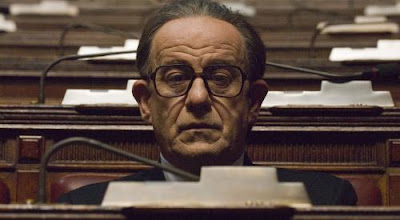 If Tarantino ever makes a political biopic, it’ll probably look a lot like Il Divo, Paolo Sorrentino’s vibrant, sometimes confounding, look at the career of former Italian Prime Minister Giulio Andreotti (Toni Servillo). What Sorrentino accomplishes with this movie is kind of amazing when you consider it alongside other politically themed films which, regardless of how good they are, can often be a little dry. Il Divo, on the other hand, is a lot of fun.

The film begins with a montage reminiscent of The Godfather’s assassination of the enemies sequence, as various figures who pose a threat to Andreotti’s continued wielding of power are taken out. Most of them are gunned down or commit “suicide,” but the most memorable of the deaths involves a car falling in slow motion through the air and then exploding on impact with the ground. The film doesn’t explicitly state that Andreotti is behind these murders, just that people have reason to believe that he might have been. For years there have been rumors of mafia ties, rumors which will eventually see him brought to trial.

We’re introduced to Andreotti’s inner circle of political cohorts who, at different times, are made to remind us of the gang in Reservoir Dogs and the Apostles in a mock last supper scene. These men are, for the most part, much more flamboyant and flashy that Andreotti, who is something of an absent presence throughout the film. All the things that you might associate with the madness of power – excessive displays of wealth, booze, women – seem to be happening around him rather than to him. He is the calm centre of the storm, quiet (very quiet) and calculating. His only display of passion comes during a long monologue in which he explains and defends himself to the audience, arguing that good can only be achieved by bad actions. It’s a marvelous moment from Sevillo who, up until this point, has had to play the character very close to the vest. For this one moment he gets to unleash and then he pulls it all back in, becoming once again that inscrutable figure.

The film unfolds at a fast pace, whipping through the events of Andreotti’s career leading up to his trial. It is not constructed to give you a particularly clear vision of the workings of Italian politics or, indeed, of Andreotti's career as a whole. Much of the story deals with rumors and conjecture, of corruption that may be real but may just be imagined. That's not to say that the film takes no position with regards to Andreotti - it casts him as a guilty party, certainly, but it also admits that proving his guilt is a difficult proposition. In a way, I suppose, the film has a kind of grudging admiration for the man who keeps suceeding while everyone around him falls.

Servillo's performance is flawless - he manages to make Andreotti both a shadow and a massive, feared presence at the same time. Andreotti is not a big man but though he's frequently placed in cavernous rooms, he never really seems "small." You wouldn't think so just to look at him, but he's kind of cool and he owns every room no matter who else is there or what else is going on. Sorrentino's style as a director helps a great deal in terms of this, underscoring Servillo's performance by treating the character and those around him like rock stars, making for an odd but highly enjoyable contrast. I absolutely love the way that this film moves, how it swoops and glides and sneaks up on its characters. It buoys a complicated story up with its energy and holds you firmly in its grip from beginning to end.